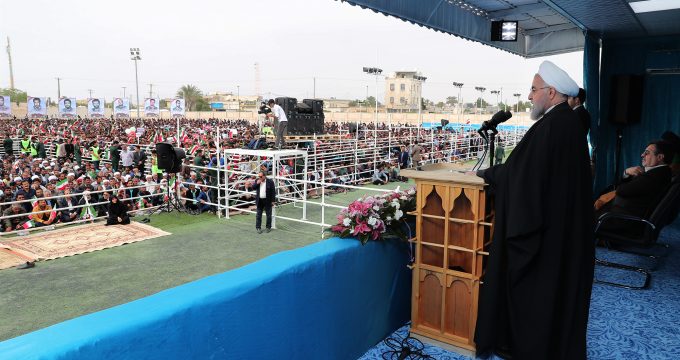 ‘Those who think US, Israel can provide them with security are wrong’: Rouhani

MNA – Iranian President Hassan Rouhani said that those regional countries who think that US and Israeli regime can ensure their security are wrong.

He made the remarks Sunday while addressing the people of Bandar Lengeh in Hormozgan province, southern Iran.

Iran wants to establish brotherly ties with all countries of the region, he said, adding, “we have never started any aggression in the region.”

“Those who think that Zionists and Americans can provide them with security are wrong. We, the Muslims, should ensure the security of all the region but unfortunately, some neighboring countries have chosen a wrong path and ran for America and Zionists’ shelter and think that Iran is greedy for their resources.”

“The day Saddam attacked Iran, we told our neighboring countries that Iran will defeat its enemy, and they should know that mercenaries will not bring security to them,” Official website of Iranian Presidency quoted him as saying.

He went on to say, “many of the regional countries and our neighbors have good relations with us, except for a couple of countries who are seeking animosity, which is to their own and the region’s detriment.”

“Those who attacked and killed our guardians and border guards must know that this hostile, barbaric act encourages us more to combat terrorism,” highlighted Rouhani, adding,

“we will not let terrorist, whose weapons and money are provided from other places to be active in our region and conduct acts of terrorism.”

“One of the important decisions of the 11th and 12th Governments has been the attempts to boost unity among religious and ethnic groups in Iran,” he noted.

Stating that, “Iran is seeking meritocracy”, Rouhani added, “anyone in this country believing in Islam, Iran and the Constitution should know that we all enjoy equal rights.”
“Enemies are after creating division between the government and the people,” he said, adding, “today is the test day for all of us.”

He also said that the enemies have not been able to achieve their goals in creating division among Iranian ethnic groups, he said, “today, all Iranian ethnic and religious groups, Sunnis and Shias are alongside each other.”

President also addressed people and said, “you took to the streets on February 11 to announce that we are not afraid of the enemies and we will protect the independence, freedom and the Islamic Republic, which are God-given blessings.”