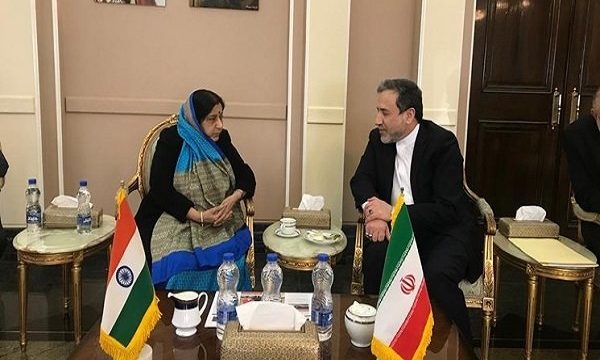 On the way to Europe, the Indian Foreign Minister Sushma Swaraj had a stopover in Tehran on Saturday and held a meeting with Iranian Deputy Foreign Minister for Political Affairs Abbas Araghchi to discuss and exchange views on bilateral and regional issues of mutual interests.

The two diplomats, in the meeting, condemned the recent terrorist incidents in Iran’s Sistan and Baluchistan province and India’s controlled-Kashmir region.

Swaraj and Araghchi expressed mutual sympathy, emphasized the need for peace and tranquility in the region through dialogue.

The Indian top diplomat also reaffirmed her government’s non-abidance by the unilateral sanctions against Iran.

After the meeting, the Iranian diplomat wrote in a tweet “Iran & India suffered from two heinous terrorist attacks in the past few days resulted in big casualties. Today in my meeting with Sushma Swaraj the Indian FM, when she had a stopover in Tehran, we agreed on close cooperation to combat terrorism in the region. Enough is enough!”