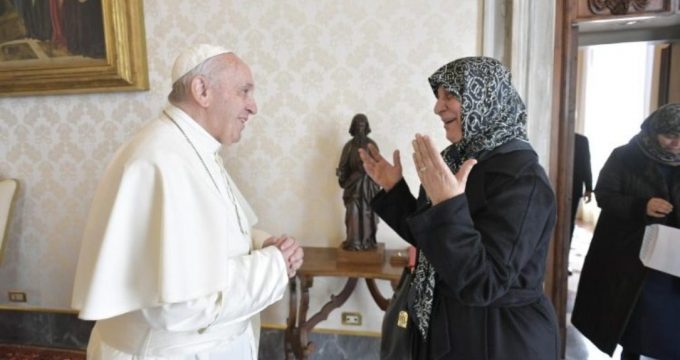 During the meeting which was held on the occasion of the 40th anniversary of Sadr’s disappearance in Libya, Rabab Sadr presented a letter to the leader of the Roman Catholic Church and asked him to look into the case of Imam Moussa Sadr disappearance. Imam Sadr and two of his companions were on an official visit to Libya in 1979 but they never returned from that country.

The edited version of the full text of the letter is as follows:

In the name of God the Compassionate the Merciful

On June 21, 1963, this sacred edifice witnessed an event that was, to say the least, exceptional: For the first time ever, a Muslim religious scholar had the honor to attend the Papal Coronation ceremony of His Holiness Pope Paul VI. Why was Imam Sadr chosen among all his contemporaries?

It is a question that breeds thousands more. Perhaps part of the answer lies in the Pope’s keen vision, which saw in Imam Sadr a figure worthy of spreading God’s message in the service of humankind. Sure enough, this vision soon became a reality. On February 18, 1975, during Lent, the Lebanese witnessed an event of historic proportions: an Imam standing at the altar of a church, delivering a sermon before worshippers deep in prayer. At the Capuchin Fathers Church, during Lent, Imam Sadr spoke about religions and their underlying unity, about faith and humankind – God’s legacy on this Earth, for whom we must all stand united. It was an exceptional moment in human history, which enriched Lebanon’s experience in coexistence and proved that Lebanon is, indeed, special and worthy of becoming an example of human and cultural significance, to be celebrated across the world. Though remarkable, the Imam’s sermon that day was but one of many admirable stances in his life and trajectory.

It is the greatest honor for us, the family of Imam Sadr, to be given this blessed opportunity by Your Holiness to present to you our cause, the cause of Imam Sadr, who dedicated every fiber of his being to empower the vulnerable and who sacrificed his freedom for the sake of humanity.

It is perhaps by the grace of God Almighty that we have the chance of meeting Your Holiness at noon on a Friday, minutes before the Friday Congregational Prayers, held by Muslims as a holy act of remembrance, and mere days away from the period of Lent, observed by Christians around the world, soon after which Muslims will begin their fast for the month of Ramadan. By divine grace, our meeting with Your Holiness also comes mere days after your historic encounter with the Grand Imam of Al-Azhar in the United Arab Emirates, with whom you signed the Document on Human Fraternity for World Peace and Living Together.

On May 10, 1997, His Holiness Pope John Paul II visited Lebanon and said in His apostolic exhortation, A New Hope for Lebanon, that “Lebanon is more than a nation; it is a message.” In fact, Imam Sadr never failed to stress this very same point, saying that “the message of the Lebanese is coexistence, and Lebanon is entrusted by God [to the Lebanese].”

A few days ago, the Supreme Pontiff came to the Arabian Peninsula to send a message of love, peace and fraternity from the land of Messengers and Prophets since the dawn of history; a land whose people suffer indescribable horrors and whose societies are being ripped apart in the beginning of the twenty-first century. Between then and now, many successes and failures have taken place, covered bravely and comprehensively in the Document on Human Fraternity.

Imam Sadr has been absent from the developments of the last forty years due to his tragic involuntary disappearance. His social views and the value system he sought to instill in society, however, are still bright beacons of hope amid the darkness that takfiri fundamentalism has cast over the Middle East and the world with its corruption and wickedness. Societies in the Middle East, the cradle of divine revelation and messages, the land of Prophets and Messengers, can do well to learn from the Imam’s relentless efforts to restore human value, dignity and rights. In Lebanon, a model of religious coexistence, Imam Sadr often valued the role of his Christian compatriots in warding off violence from their country, stating:

“The stances taken by His Holiness the Pope have time and time again been reflected in His deep prayers and His cordial pleas, echoed by the prayers and pleas of our most notable Muslim scholars. These rare opportunities, these marvelous energies blessed by the care of God The Almighty, who promised us further empowerment every time we empower His humble worshippers, our vulnerable fellow citizens – all of these opportunities and energies, are they not a sure-footed stride forward on solid foundations, joining together past and future and bringing Earth one step closer to the Kingdom of Heaven?”

If Imam Sadr were present with us today, he would no doubt second the voice of every brave soul like Your Holiness, raised for the benefit of humanity.

We would like to draw your attention, Most Holy Father, to one major and multifaceted issue that has always troubled our Imam.

Perhaps the most tragic affliction to befall the East in the past decades has been the loss of its Christian communities, whether in the form of the forced displacement they underwent in Iraq and Syria or their steady exodus from other countries in the region. This was perhaps the cause of the Imam’s deepest worries throughout the years of his social struggle. He had interpreted Lebanon’s cultural, social and historical identity as being the inheritor of Christ’s teachings, the guardian of the tradition of the Holy Quran and the historical land of coexistence and sympathy between people of all faiths, particularly Muslims and Christians. Imam Sadr reminded his contemporaries that Christians are by no means newcomers to Lebanon and the East more generally, and he often highlighted the historical and cultural role of Christians, saying: “Was it not due to our Christian brothers and sisters that Lebanon is known as the link between Eastern and Western cultures? Did Christians not journey to the West, taking with them the true essence of Eastern spirituality, and did they not return to the East, bringing with them the most valuable of Western experiences?”

Today, is there room for hope? The exodus of Christians from the East is a pitiful calamity, but perhaps a blessing for human civilization more broadly. Millions of Christians have spread across the world from the East – millions of apostles blessed with cultural, communicative and creative attributes, carrying in their hearts the heritage and culture of the East. They have breached the cultural barrier with the West, evading the stigma and scrutiny that now haunt every Eastern Muslim. Because of this, Christians must fulfil the noble mission of bringing humanity back to its senses.

In order for this dream to become a reality, it requires a favorable environment in both the East and the West. The ultimate expression of such an environment can be seen in the clearest terms in the Document on Human Fraternity for World Peace and Living Together. We thus ask God to make it a story of resounding success.

The delegation blessed by the opportunity to meet you comprises the family of Imam Sadr and is headed by his sister, Mrs. Rabab Sadr, who has dedicated her life to fight for everything that the Imam stood for and believed in: supporting the weak and vulnerable, caring for orphaned girls, healing the ill, empowering women, providing education for all, spreading the message of tolerance, preserving “Lebanon the message” and upholding the values of tolerance, peace, freedom and justice.

In August 25, 1978, Imam Moussa Sadr and his two companions, Sheikh Mohammad Yaacoub and Mr. Abbas Badr El-Din, visited Libya upon an official invitation, and they were last heard from on August 31 of the same year, after meeting with Muammar Gaddafi. The Imam would not have been so senselessly abducted, along with his companions, had it not been for his moderate beliefs, his valuable trajectory, his peaceful activism, his vision of humans and their relationship with God, his faith in his brothers in both religion and nation and his message in life. The Lebanese and Italian official investigations conducted and the Italian judiciary decisions issued in 1979, 1982 and 2015 have all concluded that the Imam and his companions never left Libya. In fact, Gaddafi himself admitted this in a public speech in 2002. Successive Libyan high authorities have confirmed this, most recently by virtue of a memorandum of understanding between Lebanon and Libya concluded in 2014. However, Libyan authorities have yet to implement the provisions of the memorandum, to live up to their promises or even to assist us in finding and liberating the Imam and his companions.

Only one word can describe those who have caused the involuntary disappearance of the Imam: Tyrants. They have punished him for his respect of the right to differ, for his tireless efforts to preserve human dignity and for his determination to stand out and to reach out. Only believers in freedom, dignity and justice can bring the Imam back to us. Our resolve to put an end to the involuntary disappearance of the Imam and his companions and to liberate them stems from our deep faith and our religious and human duty. From this holy place where the Imam stood 56 years ago, we ask for your prayers and support to resolve the case/the cause of liberating of Imam Moussa Sadr and his two companions. We are confident that your Holiness adamantly supports justice and the good of humankind.

We would like thank you sincerely for this generous opportunity and for hearing our concerns.