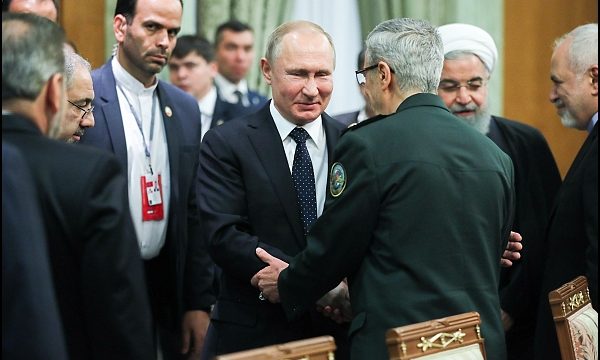 MNA – Chief of General Staff of Iranian Armed Forces Major General Mohammad Bagheri has criticized the US claim on withdrawal of its troops from Syria, stressing that the US troops must end occupying the war-torn country.

Major General Mohammad Bagheri, Chief of General Staff of Iranian Armed Forces, met with Russian Federation Defense Minister General Sergey Kuzhugetovich Shoygu and Turkish Defense Minister Hulusi Akar on the sidelines of the fourth summit of Presidents of Iran, Russia and Turkey on Syria within the Astana format which is underway in Russian Sochi on Thursday.

Major General Mohammad Bagheri arrived in Russia on Wednesday at the head of a military delegation at the invitation of Russian defense minister.

In the meetings, the key issues of defense and military cooperation, the fight against terrorism in Syria, the security in eastern Euphrates region after the US troops withdrawal, the decision on wiping out terrorists from Idlib region and the expansion of de-escalation zones were discussed.

The chief of Iranian armed forces said the announcement of the US troops withdrawal was nothing more than a claim, adding “the three countries of Iran, Russia and Turkey, as the guarantors [of peace process in Syria] call for the immediate withdrawal of forces that are present and have occupied some parts of Syria without coordinating with the legitimate government of Syria.”

It was stressed in the summit that the armed forces of Iran and Russia are present in Syria at the invitation of the Syrian government.

Major General Bagheri called for the expansion of de-escalation zones, facilitating the return of refugees to their cities and villages, establishing security in liberated areas and demining contaminated areas from landmines as the priorities of the trilateral cooperation of the armed forces of Russia, Iran and Turkey.

He further called for condemning and preventing Israeli regime’s air strikes in Syria, describing the attacks as in violation of Syrian sovereignty and disrupting the process of the fight against terrorism and restoring stability and security to the war-torn country.