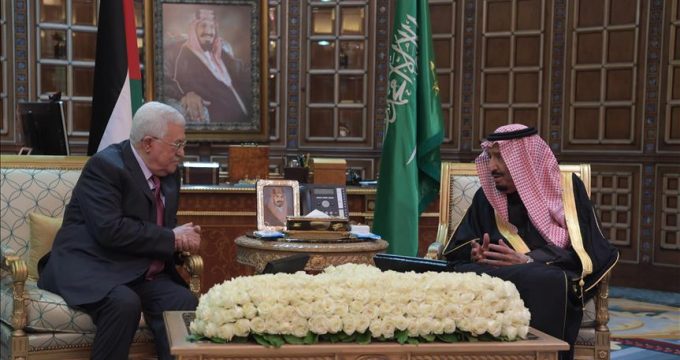 Trump’s deal of century’ conspiracy against Palestinians: Abbas to Saudis

Alwaght – President of Palestinian Authority Mahmoud Abbas told Saudi rulers that Trump’s so-called deal of the century is a plot against the Palestinian nation.

The US, Abbas told Salman, would seek to impose the plan on Palestinians and force them to back down on many of their demands in favor of Israeli regime.

The PA chief called for the revival of a previously-proposed plan, known as the “Arab Peace Initiative,” to counter the US scheme, which Washington is expected to partially expose on Wednesday during a so-called Middle East security conference in the Polish capital, Warsaw.

That Arab plan calls for the withdrawal of Israel from Arab territories, including Palestinian lands, which it occupied during a war in 1967, the establishment of a Palestinian state with East Jerusalem al-Quds as its capital, and a solution for Palestinians rendered homeless by Israeli aggression.

This is while the US scheme, hailed by President Donald Trump as “the deal of the century,” reportedly features significant encroachment on historical Palestinian demands.

Israeli Channel 13 reported in January that the bid provides for a Palestinian state in 85-90 percent of the occupied West Bank, with “most of the Arab neighborhoods” in East al-Quds as the Palestinian capital. It also stipulates various land swaps and Israel’s annexation of major blocks housing settlements, the report added.

The PA has stopped recognizing any mediating role by the US in the conflict since December 2017, when Washington recognized Jerusalem al-Quds as Israel’s “capital.” The White House later relocated the American Embassy from Tel Aviv to the occupied city, although the UN General Assembly had passed a resolution calling on it to withdraw the recognition.

The Palestinian Authority says it would not be holding any talks with the US until Washington adopts a more balanced policy.

The PA has also cautioned Arab states against gravitating towards Israel or supporting the plan amid recurrent reports of covert and overt contacts between many of those states and Tel Aviv.

Some Arab states, including Riyadh, are said to have pledged not to oppose the American proposal.

King Salman, however, told Abbas that the kingdom was committed to an independent Palestinian state with East al-Quds as its capital, AFP reported.

The monarch said his country “permanently stands by Palestine and its people’s right to an independent state with East Jerusalem as its capital,” the official Saudi Press Agency said.

The Riyadh regime has long been seeking to portray itself as a supporter of the Palestinian struggle against Israeli occupation.

However, under its de facto ruler Crown Prince Mohammed bin Salman, the kingdom has dramatically increased overtures towards Israel and is even said to be working behind the scenes with the US to finalize the deal as a solution to the Israeli-Palestinian conflict, which Riyadh views as a stumbling block to overt relations with Tel Aviv.

Bin Salman once tried to persuade Abbas to agree to the so-called Middle East peace plan, which is being drawn up by Trump’s senior advisor and son-in-law, Jared Kushner. Salman reportedly told Abbas that the US was “the only game in town” concerning the “peace” process, the Middle East Eye news portal reported in late December 2017.

During a trip to the US months later, bin Salman made explosive remarks on the prospects of ties with Israel as well as the occupying regime’s conflict with Palestinians, stirring so much controversy among the defenders of the Palestinian cause.

The first in line to the Saudi throne said in the course of his interviews during that trip that the Israeli-Palestinian conflict was the only obstacle to the normalization of ties with the Tel Aviv regime.

He attempted to put Israeli and Palestinian land claims on an equal footing in a dramatic shift in Riyadh’s long-held position, saying Israelis, like Palestinians, have the “right” to have “their own homeland”.

Israeli media also quoted bin Salman as saying during a meeting with Jewish leaders in New York that Palestinians should either accept peace proposals or “shut up” and “stop complaining”.