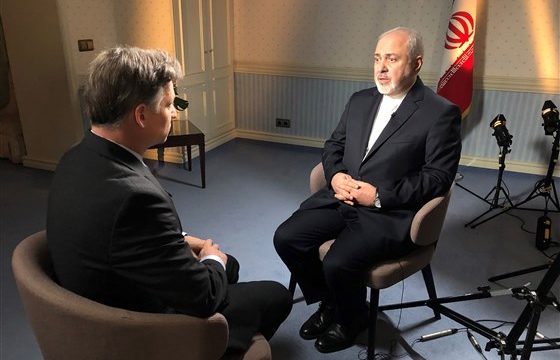 NBC | Richard Engel: The “same gang” behind the 2003 Iraq War are “at it again” in pushing for war with his country, Iran’s Foreign Minister tells NBC News.

Iran’s foreign minister, Mohammad Javad Zarif, has warned the U.S. and its allies that it would be “suicidal” to start a war with Iran, accusing Washington of having a “pathological obsession” with his country.

In a wide-ranging exclusive interview with NBC News on Friday, Zarif said that the “same gang” behind the 2003 Iraq War are “at it again” in pushing for war with his country.

Still, he said he hoped “some sense will prevail” but warned that “people will find out that it’s suicidal to engage in a war with Iran.”

Zarif also appeared to dismiss the idea of renegotiating the landmark 2015 Iran nuclear deal that aimed to curb the country’s weapons program in exchange for sanctions relief.

The administration of President Donald Trump withdrew from the agreement last year, putting it at odds with European leaders and independent watchdogs who say Iran is complying with its terms.

On Iran’s missile program, Zarif confirmed that his country had suffered two failed attempts to launch satellites over the past two months. He said it was possible this was because of a sabotage campaign by the U.S. as suggested by a New York Times report this week.

He said that Iran had already been investigating these failures but was now “looking into the specifics” because of the article in The Times.

“It’s quite possible. We don’t know yet,” he said of a possible U.S. sabotage campaign. “We need to look into it very carefully.”

Zarif’s comments came a day after Vice President Mike Pence accused Iran of pursuing “another Holocaust,” while criticizing European allies for trying to undercut U.S. sanctions against the country.

Earlier in the week, Israeli Prime Minister Benjamin Netanyahu made a statement that was translated by his office as urging “war with Iran.” Israeli officials tried to soften the reference by altering the English translation, but it nonetheless startled Iranians and even the White House.

Pence and Netanyahu attended an international conference the U.S. organized in Warsaw on Thursday. Meanwhile, Iran, Russia and NATO member Turkey met at a rival summit in the Russian city of Sochi to discuss the war in Syria.

The U.S.-led conference in Warsaw was initially intended to coalesce support around Washington’s desire to contain Iran, but the event was later broadened to cover the wider Middle East after some countries balked at the initial pitch, three foreign diplomats told NBC News.

Zarif said the Warsaw meeting was a “huge failure” because it showed, according to him, how “totally, totally isolated in the world” the U.S. has become over Iran.

Asked whether Iran was open to revisiting the 2015 nuclear deal, Zarif said he saw no reason to do this because the original agreement was so complex and painstakingly negotiated.

“The nuclear deal was the result of 13 years of negotiations,” he said. “We produced not the two-page document that President Trump signed with the chairman of North Korea but a 150-page document,” he added, referring to Trump’s accord with North Korea’s Kim Jong Un last year that was widely criticized for being too brief and vague.

Zarif pointed to agreements the Trump administration has pulled out of, such as the Intermediate Nuclear Forces Treaty, the North American Free Trade Agreement and the Paris Climate Agreement.

“You name it, they’ve withdrawn from it,” he said.

Though supportive of the nuclear deal, the European Union last month slapped sanctions on Iran’s Intelligence and Security Ministry and two Iranian nationals over allegations of orchestrating assassinations and thwarted terror plots on European soil.

On Friday, Zarif reiterated Iran’s previous denials of this charge. “If you look at those allegations you will see false flags everywhere,” he said.

Another source of friction between the West and Iran is Syria, where Tehran is allied with the regime of President Bashar al Assad as well as Russia. The U.S. and much of the West and the Sunni Arab world have opposed Assad since a 2011 pro-democracy movement morphed into an armed revolt against the Syrian government.

A number of countries, including the U.S., became involved in Syria after Islamic State extremists captured swaths of the country in 2014.

The U.S. is planning to withdraw its 2,000 troops within months because ISIS has lost most of its territory there while remaining a dangerous, scattered force.

That doesn’t mean that the pro-Syria coalition is declaring victory, Zarif said.

“Everybody lost, the people of Syria lost,” he said. But “most of the bloodshed has ended, and that’s a major accomplishment.”

He called on the U.S. and the rest of the world to support the summit in Sochi, calling it “the only peace game in town.”

“I hope the rest of the world will come to realize that our gain will not be their loss, if we gain in ending this war,” he said.