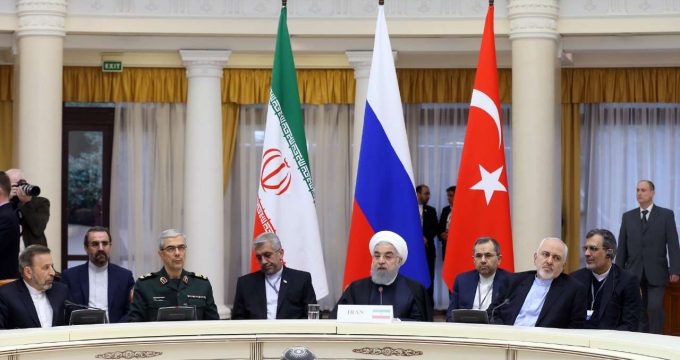 Terrorists mustn’t feel safe not only in Syria, but also anywhere in world: Iran president

President.ir – President of the Islamic Republic of Iran emphasised five axes for restoration of security and stability to Syria and described continuation of combatting all terrorist groups in Syria until their uprooting essential.

Speaking on Thursday evening at Tripartite Summit of Presidents of Iran, Russia and Turkey, Dr Hassan Rouhani said, “Syrian-Syrian dialogue should continue with the aim of establishing sustainable peace in Syria”.

“Independence, sovereignty and territorial integrity of the country, and non-interference in Syria’s internal affairs must be respected in any circumstances,” he added.

Parts of President Hassan Rouhani’s speech is as follows:

In the Name of God, the Most Beneficent, the Most Merciful

I would like to appreciate the hospitality of the President of the Russian Federation Mr Vladimir Putin. At the outset, I would like to salute the souls of human being who have lost their lives in the path of peace and coexistence of the great Syrian nation, stressing our resolve to stay on the same path.

We have gathered in Sochi to evaluate the path taken so far and make important decisions for the future that can help the people of Syria in outlining their future path away from any kind of pressure and foreign interference.

The common principles stressed by us in the fight against terrorism until the uprooting of this scourge, dialogue, compromise, tension reduction, continuation of the political process and amendment of the constitution, return of the displaced, exchange of detainees, and rebuilding of Syria; a free, independent Syria, a united, integrated Syria, with the protection of territorial integrity and national sovereignty and a Syria each and every children of which enjoy the inherent, natural and citizenship rights.

In this path, it is only Syrians who decide for their future and others must not be allowed to interfere in their internal affairs.

Until this step, our cooperation has been able to put out the fire of years of war and cruel massacre in Syria to a great extent.

Cooperation between the guarantors of peace in Syria has also been able to preserve the territorial integrity and national sovereignty and independence of Syria.

Neither in this country, nor in other parts of the world, terrorists must not feel safe and their sponsors must not think that they can use terrorism to the advantage of internal, regional and international equations.

Unfortunately, the US government is sponsoring terrorists in Iraq and Syria in pursuit of their illegal moves to take advantage of them to its own benefit.

There are credible reports showing that the US is helping ISIS terrorists transport inside Syria and moving some of them to Afghanistan.

The Zionist Regime is also active in helping terrorist groups in Syria and recently, some of the authorities of this regime have admitted to these heinous acts.

The Zionist Regime’s arbitrary actions in conducting acts of aggression the Syrian territory have jeopardised international peace and security.

The international community is responsible to confront these acts, particularly the continuation of occupation by the regime against the land and existence of the Syrian nation and government.

President of the United States has announced that he is going to withdraw American forces from Syria. These forces have entered the country without the permission of the government in Syria, against the international regulations.

This decision, if not changed under the domestic policies of the United States, is good news for the people of Syria.

Today, Syria needs our help for rebuilding itself. Postponing this process will only prolong the crisis and inflict more harms to the dear Syrian nation.

Amending the constitution based on the will and wish of the people can be a very important role in this regard.

At the end, I would like to reiterate the following points: