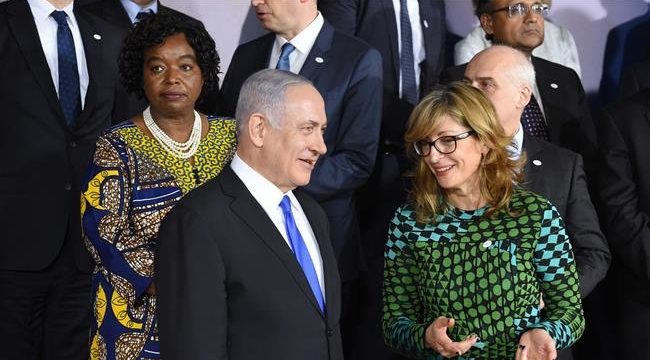 Netanyahu issues rallying cry to Arabs for ‘war’ with Iran

Press TV – Israeli Prime Minister Benjamin Netanyahu says Israel and Arab countries are sitting down together in Poland to discuss “war with Iran,” shortly after a terrorist attack against members of Iran’s Islamic Revolution Guards Corps (IRGC) killed 27 people in the southeastern province of Sistan and Baluchestan.

“What is important about this meeting – and this meeting is not in secret, because there are many of those – is that this is an open meeting with representatives of leading Arab countries, that are sitting down together with Israel in order to advance the common interest of war with Iran.” Netanyahu tweeted on Wednesday.

He later backtracked on the comment and replaced it with the words “combating Iran,” after being hit by Iran’s Foreign Minister Mohammad Javad Zarif.

Reacting to Netanyahu’s comments, Sen. Angus King, I-Maine, a member of the US Senate Intelligence Committee, told MSNBC that the Israeli PM “knew what he meant” in his original tweet.

Netanyahu is now in the Polish capital Warsaw to take part in a two-day US-led conference called “Conference on Peace and Security in the Middle East” that kicked off Wednesday.

The image grab shows Israeli Prime Minister Benjamin Netanyahu near a skating rink in the polish capital Warsaw on February 13, 2019.

Earlier in the day, Zarif raised suspicion about the Sistan and Baluchestan attack’s possible links to what he described as the “circus” in Warsaw.

As Iran, Russia & Turkey ready a summit in Sochi to work for peace in Syria & UN Court rejects US excuses & readies to rule on US theft of Iranian people’s assets, flip-flopping Trump officials try to hide their perpetual lawlessness & global isolation behind a charade in Warsaw.

Is it no coincidence that Iran is hit by terror on the very day that #WarsawCircus begins? Especially when cohorts of same terrorists cheer it from Warsaw streets & support it with twitter bots? US seems to always make the same wrong choices, but expect different results.

The so-called Jaish ul-Adl terrorist group reportedly claimed responsibility for the suicide car bomb attack against the IRGC members.The Warsaw conference is considered as part of US attempts to heap pressure on Iran globally.

Since withdrawing from the Iran nuclear deal last year, the US administration has steadily ratcheted up pressure on Tehran and vowed to increase it until Iran halts what US officials describe as its “malign activities” throughout the Middle East and elsewhere.

As part of its policy of maximum pressure, Washington in early November re-imposed what it called the harshest-ever sanctions against the Islamic Republic. The meeting has, however, received a cold welcome from Washington’s European allies, which are engaged in a diplomatic process with Tehran aimed at saving the 2015 nuclear deal.