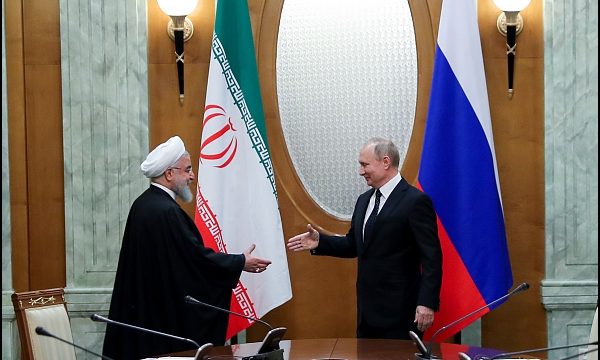 ‘Trade exchanges in national currencies of both sides serves as a big step towards expansion of economic relations,’ Rouhani told his Russian counterpart Vladimir Putin on the sidelines of Iran-Russia-Turkey summit in Sochi, Russia, on Thursday.

He said Iran-Russia-Turkey cooperation on Syria has had good achievements and remaining steps like making endeavors to protect territorial integrity of the country and taking necessary political procedures should be taken through coordination.

He also said the link among the trade, transportation and banking sectors will make bilateral relations durable.

‘Exchanges in national currencies of the two countries is a big step towards development of economic relations.’

Calling Iran-Russia ties ‘sincere and growing,’ Rouhani said Tehran-Moscow cooperation is getting towards strategic relations and the two countries have good cooperation in key regional issues like Syria.

‘We welcome investment of Russian companiesn in the Iranian energy sector,’ he said.

The Iranian president went on to point to the Joint Comprehensive Plan of Action (JCPOA) and said the Islamic Republic of Iran has been acting on its JCPOA commitments and other parties are also committed to act on their duties.

‘If both sides want consolidation of the JCPOA, one-sided fulfilment of the commitments will not get us to the goal,’ Rouhani stressed.

Emphasizing that Europe should compensate delays in fulfillment of commitments, he said Russia has a very important role in the JCPOA consolidation.

In the initial part of his address, President Rouhani thanked Russian President Vladimir Putin for condolence and voice of sympathy over the Wednesday terrorist attack on a bus carrying the Islamic Revolution Guard Corps (IRGC) forces on Khash-Zahedan road in Sistan-Baluchestan Province.

‘The incident has made it necessary to have exchange of views and more consolidated will to launch joint campaign against terrorism.’

Putin for his part emphasized that Russia powerfully supports maintaining the JCPOA.

‘No evidence has been found to substantiate the claim that Iran has been violating its commitments. We thank Iran for cooperation within framework of commitments and we heope that the sides will act on their liabilities.’

Putin also referred to Sochi summit and said he was thankful of Iran for its part in settling problems in Syria and said he believed mutual cooperation on bilateral framework and Astana process have had very major achievements and other remaining issues too should be solved in the same way.

‘Major portion of bilateral agreements are implemented and cooperation should be strengthened. We have good cooperation in the fields of transportation, energy, industry and agriculture as well as defense and Moscow seeks deepening the cooperation with Tehran,’ President Putin stressed.

In the beginning part of his speech, the Russian President condoled Iranian people and bereaved families on Zahedan terrorist incident and congratulated Iranian people on the 40th victory anniversary of the Islamic Revolution of Iran and their victory and progress.

A total of 27 Islamic Revolution Guard Corps (IRGC) forces were martyred and 13 wounded in the Khash-Zahedan road terror attack.