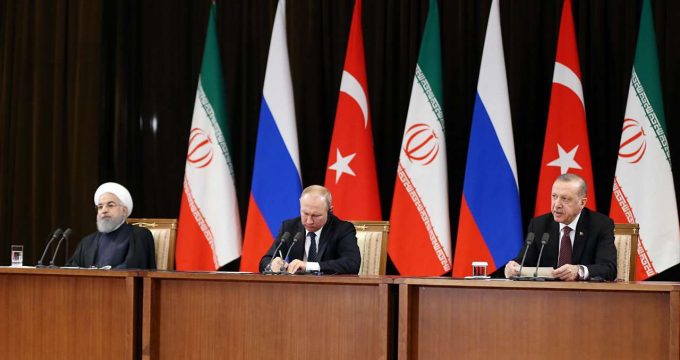 IRNA – President Hassan Rouhani says strong campaign against terrorism and stabilization of security in Syria are the joint objective of Iran, Turkey and Russia.

President Rouhani made the remarks in a press conference at the end of the Sochi Summit in Russia on Thursday.

Presidential website quotes Rouhani as telling reporters at the end of Sochi Summit that the tripartite meeting was very helpful and explicit.

Thanking Russia for hospitality, he said the fourth summit was within framework of Astana process and the common goal of Iran, Russia and Turkey is stern campaign against terrorism, restoration of stability and security to Syria, compilation of new constitution and consolidation of a democratic government in the country, return of refugees and reconstruction of Syria.

He added that the summit emphasized campaign against terrorism in the remaining regions in Syria, including Idlib.

The president went on to say that all fully agreed that de-escalation of tension and presence of peace-guaranting forces in the region is temporary and Idlib is part of Syria and should be cleansed and terrorists under any name and title should leave the country.

‘There are many sources of concern over destiny of the terrorists because a number of them are imprisoned in Syria and if return to their home, they will spread unrest and terror in many regions. Moreover, we are very concerned over Americans transferring part of Daesh (ISIS) forces to Afghanistan because such a move can be dangerous for the entire Central Asian region and other parts,’ he said.

‘We should not claim superficially to fight terrorism and help them implicitly. Our second concern with the US is that through superficially pulling its forces out of Syria, our information says Americans will continue intervention in Syria.’

It is not important how many Americans are present in Syria, what’s important is letting Syrian people decide their fate, said President Rouhani, adding that Americans should believe that Kurds are part of Syria and Syria is a nation and not two nations.

‘All of us believe that security of Syria neighbors, including Turkey, should be preserved. Turkey should feel secure out of Syria and we want a brotherly and friendly relationship among all Syria neighbors and the country,’

‘This can build long-term security for Syria.’

Rouhani also emphasized that Syria territorial integrity, Syrian Kurds’ rights, terrorism annihilation and Turkey security should be taken into consideration, adding that illegal intervention by Zionist regime in Syria is source of concern for Syrian and other regional nations.

He further noted that Israelies fly over the region, Lebanese soil and Syria whenever they wish and bombard from any point they want and unfortunately, the UN and officials worldwide are silent in the face of such repeated invasions in Syria.

The silence means that they do not wish full security in the region and Syria, the Iranian president said.

‘We are so much happy that the three peace guarantor states will continue efforts to ease tension and provide a stable future for Syria; as believed since the beginning, the key to Syria is eventually political in nature and there will be no military solution.’

Rouhani hoped that Syrian people will have a future in peace and tranquility after years of hardship and suffering and due to the same reason the international community should strive for speedy return of refugees and Syria reconstruction.

Noting that cooperation among the three important countries of the region to restore stability in Syria is of extreme importance, Rouahni said, ‘Perhaps no one imagined a few years ago that security will return to Syria and Damascus will be able to continue its sovereignty and all horizons of hope will be open to Syrian people.’

Rouhani said cooperation among the three countries is of high value for security of the region and the world.

‘Of course, we need cooperation among all countries and the UN to reach final step in Syria and the model can be a very good model to remove regional problems. We are interested that the three countries will also launch joint efforts in connection with security of the entire region and they will be able to expand trilateral cooperation, besides Syria, to other issues of mutual interest.’