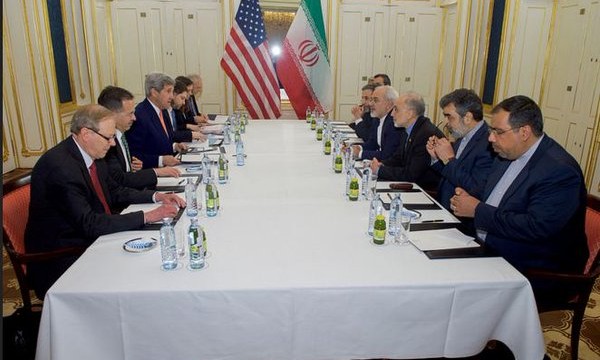 The next US president should rejoin the Iran nuclear deal

Foreign Policy | Ilan Goldenberg, Eric Brewer: To the surprise of many analysts (us included), Iran has continued to abide by the 2015 nuclear deal, formally known as the Joint Comprehensive Plan of Action, despite the Trump administration’s decision last year to withdraw from it and reimpose U.S. sanctions. Tehran seems to be betting that if it can weather the economic pressure, come 2021, a new U.S. president could reverse Donald Trump’s decision and re-enter the deal. As long as this hope holds out, the deal’s backers in Tehran appear to have persuaded Supreme Leader Ali Khamenei to stay in the deal for now, capitalizing on the discord between the United States and its European allies, and avoiding the larger snapback of European and United Nations sanctions that would follow if Iran were to return to its nuclear activities.

The first question a hypothetical 2020 election victor (not to mention candidates on the campaign trail) will face is whether or not the United States should re-enter the deal. The answer should be a resounding yes. The Iran nuclear deal is one of the most robust and detailed nuclear agreements ever achieved, and when the United States withdrew, the deal was working exactly as designed: Iran’s nuclear program was drastically curtailed, and the U.S. ability to detect any Iranian attempt to build a bomb—should its ambitions ever change—was significantly improved. Most importantly, Iran was adhering to the deal and continues to do so. If the United State re-enters the deal, these benefits will persist.

The nuclear deal was an international agreement, reached with European allies, China, and Russia, and endorsed by the U.N. If, under a new administration, the United States wants to reassume its mantle as a global leader that upholds its international commitments, reentering the agreement is essential.

But the more complicated question is how the United States should re-enter. As tempting as it might be for a new president, it would be a mistake to simply return to the agreement as it was. Rather, a future president should use the leverage gained from Trump’s exit—however much they might disagree with that decision—to come to some preliminary understandings with Iran on the many issues of contention that remain in the relationship and on the future of Iran’s nuclear program. The message to Iran and the world should be: We absolutely expect to rejoin the agreement, but first, we need to talk.
Since Tehran has decided that abiding by the nuclear deal is in its interests despite Washington’s withdrawal, a U.S. return and the corresponding sanctions relief would essentially be a unilateral concession to Iran. Washington will have the ability to ask for something in return. But it should also be realistic and not ask for too much, since it is in the United States’ interest to go back into the agreement, and because there are political limits to what Iran would be willing to provide at the outset. Though Iranian President Hassan Rouhani or his successor might want the sanctions relief, Tehran can’t be perceived as capitulating to the United States—which is already in violation of the deal in the view of the Iranian government.

Through quiet diplomacy, the United States should gain Tehran’s commitment on a new negotiation agenda that addresses a number of key issues. The parties could set October 2023 as a target date for turning this preliminary agenda into a new agreement as a successor to the Iran deal. This date—known in the nuclear deal as “Transition Day”—is significant. At that point, Iran is expected to formally seek ratification of the Additional Protocol—which grants the International Atomic Energy Agency greater access to Iran’s nuclear program—and the United States, under the terms of the deal, would have to permanently terminate a large swathe of sanctions, including those passed by Congress, instead of just waiving them. U.N. restrictions on Iran’s missile program are also scheduled to be lifted by this date. The political reality, however, is that Congress is unlikely to remove sanctions without progress on other issues, making this date a good deadline for further diplomatic breakthroughs.

What would such an agenda look like? First, Iran should be open to discussing what it plans to do with its nuclear program before certain restrictions within the agreement—such as those on its uranium stockpile, enrichment level, and centrifuges—expire. The United States should express clearly that the intent is not to have a veto over Iran’s nuclear future but to establish a forum (through the deal’s Joint Commission, for instance, which allows parties to discussion implementation issues) in which Iran’s nuclear needs can be discussed and addressed to uphold the goals of the deal while continuing to build confidence among its participants.

There is already a model for this type of consultation: During negotiations, Tehran prepared an enrichment research and development plan that informed the limits then placed on its advanced centrifuge work. An ongoing, consultative mechanism is also consistent with the spirit of the nuclear deal, which states in its preamble that, as limits on Iran’s activities expire, the growth will occur as “a gradual evolution, at a reasonable pace,” and in a way “consistent with international nonproliferation norms.” A forum in which Iran spells out how it sees its nuclear program evolving would help ensure these steps are based on technical needs and avoid surprises that could potentially escalate into a crisis. Also, getting Tehran to commit to a consultative mechanism would not prevent the United States or other members from providing additional benefits to Iran in exchange for the extensions of sunset dates or other restrictions.

Second, the United States should insist that any current issues with Iran’s compliance with the agreement be resolved before Washington gets back into the deal. Although Tehran is holding up its end of the bargain today, Iranian officials are apparently considering rolling back some of their commitments to send a political message. 2020 candidates should communicate this position early to deter Iran from engaging in this activity, and they should recognize the reality that a future U.S. president won’t be able to rejoin a deal—and shouldn’t want to—if Iran doesn’t have a clean bill of health. Once back in the deal, the United States should continue to emphasize that it expects Iran to comply with all of its IAEA safeguards obligations and nuclear deal requirements, and to work with the IAEA to address any new questions or concerns that emerge. Washington should also think anew about how it can best ensure the agreement is robustly monitored and enforced, as well as support the IAEA in these efforts.

Third, the United States should secure an agreement from Iran to hold discussions on its missile program. Broaching this topic would be difficult. Iran’s missiles are the backbone of its defense and deterrent capabilities, and the supreme leader and Iranian officials have routinely warned that missiles are off-limits for negotiations. The U.S. starting point here would necessarily need to be broad, but one possible entry point is to explore how to codify Iran’s self-imposed range limit of 2,000 kilometers (about 1,200 miles), an approach that would avoid the appearance of Iran providing concessions to the West. Iran would almost certainly insist on including the threats it faces from Israel and the United States as part of any discussion. The goal here would not be to solve the missile issue before getting back into the nuclear deal, but simply to get it onto an agenda.

Finally, Iran and the United States should also agree to begin broader discussion on regional issues such as Syria and Yemen. As opposed to the issues of nuclear sunset clauses and the missile program, which can all be seen as extensions of the nuclear deal, these issues will need to be addressed in a separate format that could include not only the original signatories—China, France, Germany, Russia, the United Kingdom, the United States, and the European Union—but also additional players from the Arab world or even Israel. During the initial negotiations, all parties agreed that lumping these items in with the nuclear issue would create a dynamic that was simply too complicated and that the issues should be tabled until after a nuclear deal was reached. But now that the differences on the nuclear question are much less pronounced and complex, renewed negotiations with the United States would provide an ideal moment to start these discussions.