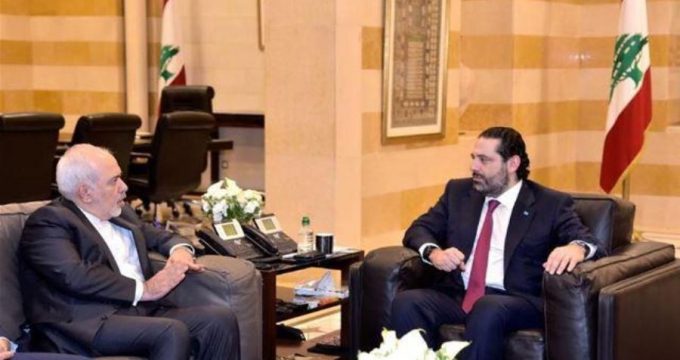 February 12, The Iran Project – Heading a high-ranking politico-economic delegation, Iran’s Foreign Minister Mohammad Javad Zarif paid a two-day official visit to the Lebanese capital of Beirut, holding separate talks with the senior officials in the Arab country to confer over a host of issues including expansion of political and economic relations.

On the first of his trip ( Sunday, Feb. 10), he also hosted several senior figures and representatives of the Lebanese and Palestinian parties as well as the Secretary-General of the Islamic Jihad Movement of Palestine Ziad al-Nakhalah at the Iranian Embassy in Beirut.

Upon his arrival at Beirut airport on Sunday noon, asked if Iran was ready to offer military aid, Zarif said: “We always have this type of readiness and we announced on other occasions that this tendency exists in Iran but we are waiting for this desire to exist on the Lebanese side.”

Zarif stated that his visit aimed to declare Iran’s support for Lebanon and to announce that it “has complete and comprehensive readiness to deal with the brotherly Lebanese government in all areas”.

In a meeting with Iranian FM Zarif, President Aoun called for Iran’s aid to Lebanon for helping Syrian refugees’ repatriation, saying the problem of the Syrian refugees in Lebanon requires an essential solution which is their return to Syria.

During the meeting, both sides discussed developments in the region and Lebanon and also reviewed Iran’s position toward the developments.

In a meeting with Zarif, Sayyed Nasrallah hailed the support of the Iranian leadership, government and people for Lebanon, Palestine and all the resistance movements in the region vis-a-vis the Zionist aggression and the takfiri terrorists, stressing that it led to victories in several fields.

He hoped that Iran would keep the same track despite the pressures and conspiracies hatched against the Islamic Republic of Iran.

Zarif, for his part, underscored Iran’s support for the Lebanese government, people and resistance and readiness to sustain all forms of cooperation with Lebanon in all the possible domains.

The senior Iranian diplomat congratulated setting up of the Lebanese government in a meeting with Prime Minister Saad Al-Hariri, describing it a major achievement.

Visiting Zarif also hoped that establishment of the Lebanese government, which is based on the public vote in the recent parliamentary election, would play a crucial role in pushing the country’s affairs forward.

Zarif reiterated Iran’s readiness for promoting ties with Lebanon in all fields.

Al-Hariri, for his part, stressed the need for enhancing ties between Tehran and Beirut.

During a joint press conference with Lebanese Foreign Affairs and Expatriates Minister Gebran Bassil, Zarif said all countries must facilitate the peace process in Syria and refrain from making decisions on its fate, stressing that foreign troops need to end their unauthorized presence in the Arab country.

During the presser, the Iranian foreign minister hailed the Lebanese government’s stance on an anti-Iran conference due to be held by the US in the Polish capital city of Warsaw later this week.

In the meeting with Zarif, representatives of Lebanese political parties and movements congratulated Iran on the 40th anniversary of the victory of the Islamic Revolution and expressed their views on the situation in Lebanon and the region and ways to expand ties between the two countries.

In turn, Zarif reiterated Iran’s backing to independence and national sovereignty of Lebanon and Palestine’s resistance.

During the meeting with Ziad al-Nakhalah, the Iranian foreign minister expressed Iran’s support for the Palestinian resistance groups against the Zionist regime’s occupation and aggression.