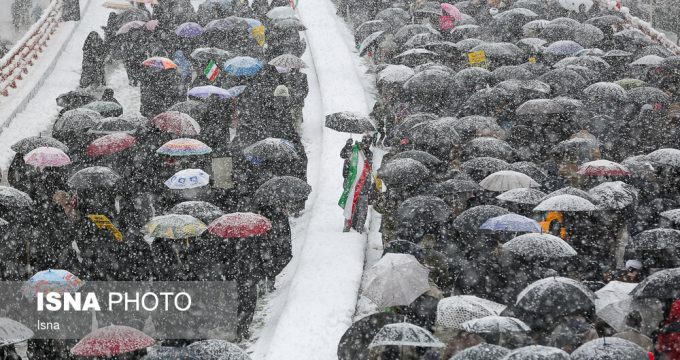 Press TV – Mainstream media have provided extensive coverage of the mass rallies in Iran marking the 40th anniversary of the Islamic Revolution, which brought millions of people to the streets in support of the Islamic establishment.

Iranians from all walks of life celebrated the event in different cities on Monday despite the stepped-up US pressure campaign on the country.

The New York Times reported that this year’s marches “seemed larger, despite the uninviting weather.”

“Braving a drenching rain, Iranians came out in droves on Monday to march up Revolution Street to the capital’s Freedom Monument, including families pushing strollers decorated with balloons in the red, white and green of the country’s flag, clerics, teenagers and others, for a huge state-backed rally commemorating the 40th anniversary of the Islamic Revolution,” it added.

Channel NewsAsia said that “vast crowds” had poured out into the streets to commemorate the event.

“The routes leading up to the square were packed with people as loudspeakers blared revolutionary anthems and slogans. Life-size replicas of Iranian-made cruise and ballistic missiles stood in a statement of defiance after the US last year reimposed sanctions following its withdrawal from a deal on Tehran’s nuclear program,” read a report on its website.

“State television offered blanket coverage of the commemorations, showing marches in cities ranging from Abadan in southwestern Iran to Mashad in the northeast,” it added.

It also covered an address by President Hassan Rouhani, who insisted that enemy plots against Iran would fail.

“Much to the dismay of America, the revolution has reached its 40th year,” it cited a banner as reading.

“Iranians thronged streets across the country, many with portraits of Ayatollah Ruhollah Khomeini, the Shiite cleric who toppled the Shah in the historic Islamic uprising. State TV showed crowds defying rainy weather and carrying Iranian flags while shouting anti-Israeli and anti-US slogans,” the report said.

Al Jazeera said Rouhani had led “the rain-soaked commemoration in Tehran” and vowed to continue the country’s missile defense program amid the resumption of US sanctions.

It also highlighted the Iranian president’s speech, during which he stressed that the Islamic Revolution had saved the country “from tyranny, colonization and dependence.”