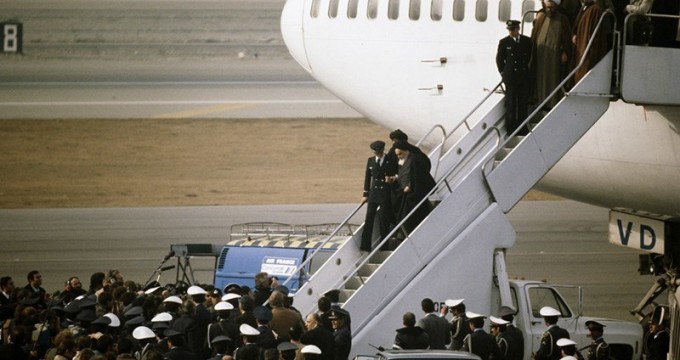 Iranian Diplomacy | Kaveh L. Afrasiabi: In his seminal philosophical work, After Virtue, Alasdair MacIntyre has written about the heroic societies, distinguished in terms of the role of individuals and their role-identities, whereby “the self becomes what it is in heroic societies only through its role; it is a social creation, not an individual one.” In the modern context, it is also a global creation, and not simply a national one, at the nodal point of antagonistic relations. Another philosopher, Michel Foucault, keenly understood this and thus took MacIntyre’s insight one step further when he described the Iranian Revolution in terms of a higher calling, that is, to confront the chains “we all bear,” i.e., a transformative and liberating phenomenon with globalist connotations– that has heroically fought against the formidable odds with the blood and honor of an entire generation.

In the West, as expected, the narratives that question the Iranian Revolution can be found aplenty. Case in point, Shireen Hunter, a bureaucrat in Iran’s ancien regime, has written that the Islamic Revolution did not solve any problems. On the contrary, successful revolutions often manage to solve the principal contradictions that generate them in the first place, in Iran’s case the foreign dependency and external domination. By terminating American hegemony, this revolution created a crisis of American power that continues to this date, which is why as recently stated by Foreign Minister Zarif, consistently for forty years Washington has never ceased its efforts for regime change in Iran.

Consequently, today Iran is subjected to a naked economic warfare by a Western superpower that has yet to come to terms with its strategic loss in Iran. In fact, there is nothing new about Trump’s “maximum pressure” campaign against Iran: effectively since 1980, Iran has been targeted by US power, which has used other lesser powers in the region to attack and weaken the revolutionary Iran. Iran’s revolution has as a result acquired a still-born character, frozen at its infancy of taking up the challenge of American power then and now, with little sign of any radical change on the horizon of the future. In turn, this gives ordinary Iranians a heroic identity, by virtue of their anti-imperialist steadfastness and unity of purpose transcending social cleavages. This is vintage Third World revolutionarism par excellence, shaking up the neo-colonial status quo in the region and spearheading liberating changes, for autonomy and self-assertion from the ashes of ancien regime.

Rivers of blood, nurturing the sapling soul of the revolution. With such words engraved in the preamble to the Islamic Republic of Iran’s Constitution, and the duty to solidarity toward the oppressed of the world made incumbent on the new polity, Iran’s historic mission has been fully practiced, much to the chagrin of the reactionary states that have sheltered themselves by the protective shield of Western powers, who turn a blind eye to the non-participatory and archaic political systems and their abuses of human rights of their client states, concerned only about their own power and material interests. Iran’s heroic society, on the other hand, is fully in tune with the changing regional and global circumstances, the challenges to American power that is relatively declining, and the importance of maintaining the revolutionary elan irrespective of the enemy’s hypocritical complain that Iran is not “normal” and ought to be “normalized” by their imperial disciplining power.

The discourse of normalization is yet another unsavory facet of Western domination under the garb of democracy. Its antidote is, however, none other than the principal prescriptions of the heroic society and the “value rationality” of the heroic revolution that informs today’s Iran’s path today much the same way it did forty years ago.

Resist and survive, no matter what the odds. The lantern of revolutionary ideology continues to shed light on the path forward, which is strewn with the sacrifices of an entire nation, in the great patriotic cause to stand up to American leviathan that seeks to grind Iran to submission irrespective of international norms and principles acting like a rogue superpower, for the fact of the matter is that it is the US and not Iran that has trashed an international agreement and with it a UN resolution. The verdict of history is already out on this issue, reflected in an interim decision of the world court. Iran’s heroic resistance has already disarmed the latest American offensive targeting Iran’s independence in courts, and that is simply a minor facet of a ‘great refusal’ now forty years old.