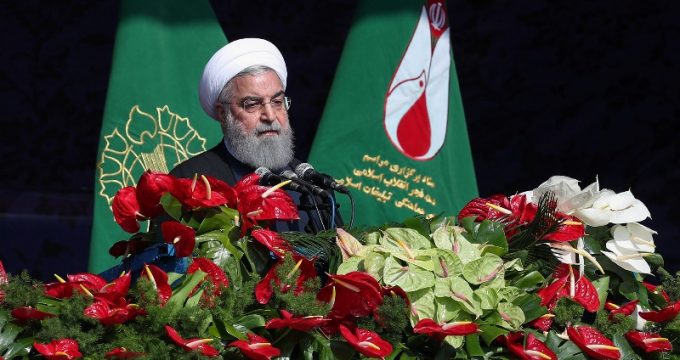 IRNA – Iran will continue the path of constructive interaction with the world and elevating its position, said President Rouhani while addressing the ralliers of the 40th anniversary of the Islamic Revolution in Tehran on Monday.

Iran is the only country in the region that can rush help to other regional countries; the defeat of Daesh (ISIS) in Iraq and Syria showed the power of Iran and its honesty in fighting terrorism,’ said President Rouhani.

He also said that Iran is playing a role greater than ever in history.

The President said Iran will continue strengthening its military and defensive power. ‘Today, 85 percent of military equipment, needed for defense of the country, is produced domestically.’

He said, ‘We have not asked for and will not ask for permission to make missiles. We will continue our military and defensive path.’

Saying that Iran’s military power, especially in the past five years, has been ‘astonishing’ for the world, President Rouhani added, ‘That means that the enemy will never reach its goals. The world should know that the Islamic Republic of Iran is stronger than what it was in the first years after the Islamic Revolution.’

President Rouhani added that Iran is fighting a psychological war with the enemy and needs to stay united to win it.

‘Iran will not let the US win this war. The US has repeatedly announced in the past few years that Iran would fall but to no avail. Iran has gained a superior standing rather. Thanks to its resistance and unity, Iran will overcome problems and barriers.’

He also added that the aspirations of the Iranian nation have not changed and those are the same as those at the time of Islamic Revolution 40 years ago.