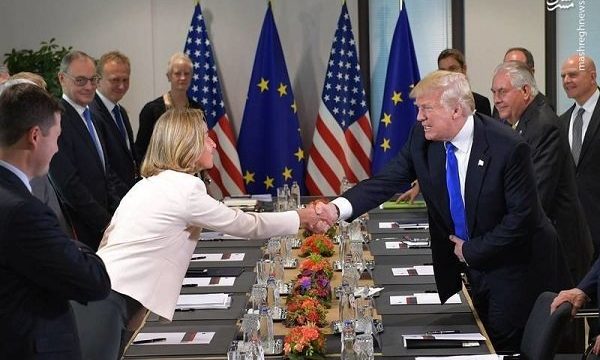 INSTEX: A US-Europe game to get concessions from Iran?

Press TV – The Asr-e-Iranian daily has interviewed a number of Iranian lawmakers to shed light on the negative sides of the European-designed Instrument in Support of Trade Exchanges (INSTEX). Here is a rough reproduction of the piece recently published by the Persian-language newspaper.

Following months of foot-dragging, France, Germany, and Britain finally unveiled a promised financial mechanism that was supposed to pave the way for Europe to both deliver on its own commitments under the 2015 Iran nuclear deal and compensate for America’s withdrawal from the agreement, named the Joint Comprehensive Plan of Action (JCPOA).

However, the joint statement that formally announced the launch of INSTEX showed the Europeans are not only not seeking to hold up their end of the bargain but are also after making even more demands on Tehran, including urging it to join the Financial Action Task Force (FATF) as a condition for activating INSTEX.

Speaking to Asr-e-Iranian, lawmaker Mohammad Javad Koulivand said INSTEX “cannot be counted as a significant success because the mechanism is restricted to the trading of food and medicine, whereas such goods are not the target of the US’s secondary sanctions, which the Europeans are afraid of; therefore, nothing special has practically happened.” The Europeans, he said, are more seeking to circumvent Iran than standing up to the United States.

“Unveiling INSTEX was a mere PR show meant to deceive Iran and will definitely bring no benefit to the country. The Europeans are only trying to pressure Iran into meeting their excessive demands. Urging Iran to join the FATF in return for nothing means Europe is seeking to fish in troubled waters” following Washington’s exit from the JCPOA, Koulivand said. “Using a mere barter trade mechanism as a tool to get Tehran to approve the FATF’s conventions is totally politically motivated and technically amounts to blackmailing Iran. The country’s diplomatic apparatus should take a stand against this blackmailing and defend Iran’s rights in the best way possible.”

Europe’s excessive demands have even sparked criticism from the supporters of an FATF-related bill in the Iranian Parliament. Ali Motahari, a member of the Parliament’s presiding board, welcomed the launch of INSTEX as a “positive” step that signals Europe’s resolve to keep the nuclear deal alive, but said the mechanism can be best judged when it becomes operational.

Motahari, however, added that Europe’s reported attempt to link INSTEX to the FATF is considered as a sort of “interference in Iran’s domestic affairs,” and that the Foreign Ministry must react appropriately. “The two issues must not be tied together. This mechanism would benefit Europe in its bid to protect its independence against America and break the dominance of the US dollar,” the senior MP added.

‘Europe in cahoots with US’

MP Seyyed Amir-Hossein Ghazizadeh Hashemi also said INSTEX is “only a piece of paper” and “would be of no use.” He said food and medical goods are already exempt from Washington’s secondary sanctions and that Iran faces no problem in meeting its needs in those areas.

“It seems the Europeans intend to drag us to the negotiating table and make us undertake new commitments. Both the US and Europe were intent on leaving the JCPOA, but they used different methods. The Americans first pulled out so they could launch a pressure campaign from the outside by re-imposing the sanctions, setting the stage for the Europeans to force Iran into more negotiations and make it surrender to their demands, without them having to pay any price,” Ghazizadeh Hashemi said.

The legislator said the Europeans “want to create new obligations for Iran in order to keep the country from making further progress. Setting a pre-condition for INSTEX serves to support this theory. The financial mechanism should have been designed to help Europe fulfill its commitment, under the JCPOA, to meeting Iran’s interests, and should have had nothing to do with the FATF.”

‘A supplement to US bans’

Yaghoub Shiviari, another MP, said Europe’s launch of the Special Purpose Vehicle (SPV) has, right from the start, sparked serious concerns that need to be addressed or the trade mechanism will not only fail to help ease the pressure caused by US bans but will also swiftly turn into a supplement to those sanctions and serve to advance Washington’s objectives from a new direction. Europe’s call for Iran’s accession to the FATF, he added, raises two highly significant concerns: evidence shows the Europeans plan to operationalize INSTEX only on the condition that Iran adopts the Terrorist Financing Convention (CFT) and the Palermo Convention — which are preludes to access the FATF. In that scenario, INSTEX would not only fail to alleviate the economic pressure on Iran but will turn into a pressure tool aimed at getting more concessions from the country, according to the lawmaker.

“It is possible that INSTEX will solely do business with those financial institutions and companies inside Iran that abide by Europe’s required standards in countering money laundering and terrorism financing; this means the trade system would serve as a new waterway to inject self-sanctioning into Iran and cut cooperation between the country’s private sector and the target institutions,” Shiviari said.

Shiviari further argued that depositing all of the revenues from oil sales into the transactions channel could do a great service to the American sanctions regime. “This would basically strip Iran of the possibility to sidestep US bans and enable America — which has a full grip over INSTEX — to identify Iran’s customers.”

“There would be no better news for the US than Iran handing over sensitive data on its own transactions with its trade partners to a financial institution that would work in close harmony with the US Treasury Department,” said the MP.

Officials thus need to think twice, stop pushing the country towards reliance on the US and follow the guidelines of Leader of the Islamic Revolution Ayatollah Seyyed Ali Khamenei, particularly those regarding Resistance Economy, in managing Iran’s economy.