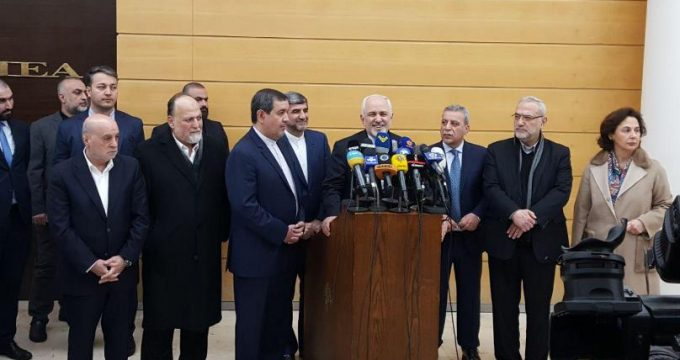 Iran ready to cooperate with Lebanon in all areas: FM Zarif

Foreign Minister Mohammad Javad Zarif said Iran will be ready to work with Lebanon in all areas if its government asks for it.

Kharrazi: Iran ready for dialogue with all regional states

Head of Iran’s Strategic Council on Foreign Relations Kamal Kharrazi said on Saturday that Iran is ready for talks and cooperation with all regional states in all fields.

Iraqi parliament speaker Muhammad al-Halbusi said on Saturday that Iraqi officials have always been emphasizing that Baghdad opposes the US sanctions against Iran and any policy of sanctioning nations.

Iran’s Foreign Minister Mohammad Javad Zarif says the US-sponsored conference on the Middle East, which is set be hosted by Poland next week, is doomed to failure since its sponsors are retreating from their initial stance on the event.

President of Azerbaijan Ilham Aliyev has congratulated Iranian President Hassan Rouhani on the occasion of the 40th anniversary of the Islamic Revolution’s victory.

Commander: Iran has no trust in Europeans

Commander of the Islamic Revolution Guards Corps (IRGC) Aerospace Force Brigadier General Amir Ali Hajizadeh said Iran places no trust in European countries, reminding that the bloc was the main supplier of arms to former Iraqi dictator Saddam Hussain during the 1980-88 war against his country.

HRW Chief: US not eligible to criticize human rights in Iran

The Executive Director of Human Rights Watch in a message rejected US eligibility to criticize human rights in Iran.

Iranian Navy’s Deputy Commander Rear-Admiral Touraj Hassani-Moqaddam says the force has received requests for joint military drills outside the Indian Ocean from different states, including Russia and China, which are being reviewed by the Army.

Russia predicts increase in volume of cargo transportation from Iran

Russia’s Minister of Economic Development Maxim Oreshkin says volume of cargo transit and transportation from Iran to Russia will increase once the agreement on establishment of a free trade zone between the Eurasian Economic Union and Iran is approved.