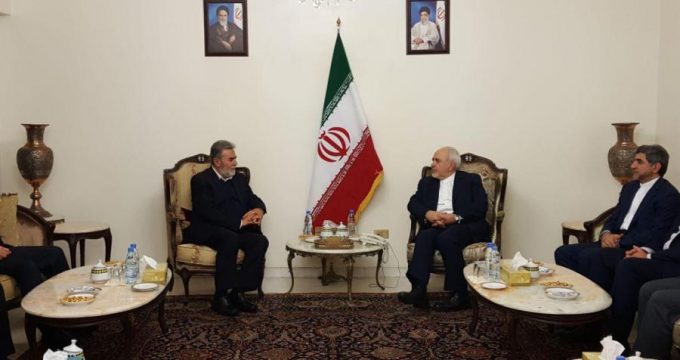 Iranian Foreign Minister Mohammad Javad Zarif and the Secretary-General of the Islamic Jihad Movement in Palestine Ziad al-Nakhalah discussed the latest developments in the region and Palestine.

During the meeting, the Iranian foreign minister expressed Iran’s support for the Palestinian resistance groups against Zionist regime’s occupation and aggression.

Zarif arrived in Beirut on Sunday to meet Lebanese authorities.

Zarif’s latest visit to Lebanon dates back to two years ago when he held talks with Lebanon’s newly-elected President Aoun in Beirut, becoming the first foreign minister to meet with the Lebanese head of state.

He had also met with Lebanese Prime Minister, Saad Hariri, during his previous visit to Beirut.

Many observers see the visit in line with Iran’s support and content with formation of national unity government in Lebanon.