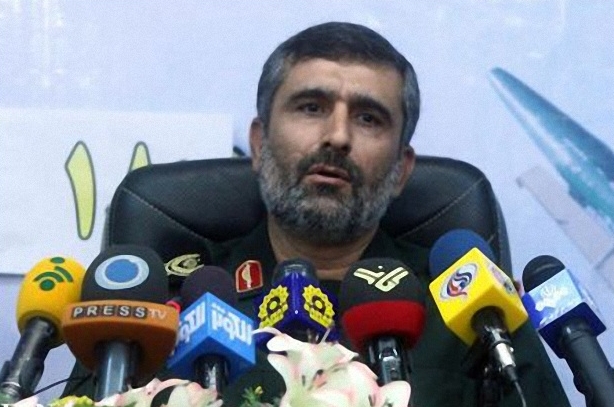 Commander: Iran has no trust in Europeans

FNA – Commander of the Islamic Revolution Guards Corps (IRGC) Aerospace Force Brigadier General Amir Ali Hajizadeh said Iran places no trust in European countries, reminding that the bloc was the main supplier of arms to former Iraqi dictator Saddam Hussain during the 1980-88 war against his country.

The commander reminded that European countries had provided various forms of arms support to the former Iraqi dictator Saddam Hussein during his 1980-1988 invasion of Iran.

“They should be answerable for their support for Saddam and crimes against the Iranian nation,” he said, adding, “We do not trust the Europeans, and it is better for them not to sacrifice themselves for (US President Donald) Trump.”

He was apparently referring to European countries’ echoing Washington’s stance concerning the Islamic Republic and their trying to similarly exercise pressure on Tehran.

The commander made the remarks late on Thursday, during a ceremony attended by IRGC Commander Major General Mohammad Ali Jafari, where Iran unveiled its underground ballistic missile production factory for the first time.

Describing the projectile’s features, he compared the success achieved through its production to that of the Zolfaqar ballistic missile, whose mass production the country began in September 2016. However, Dezful’s range reaches 1,000 kilometers, 300 kilometers above Zolfaqar, and its destructive capability is twice the latter’s “given the special materials used in its warhead,” the commander said.

Officials have not revealed any further details about the IRGC’s underground ballistic missile production factory.

The IRGC had earlier displayed missile towns where hundreds of its ballistic missiles have been deployed, but this is the first time that it has displayed an underground missile production plant.

During the unveiling ceremony, IRGC top commander said, “Mass production of precision and intelligent missiles according to the world’s latest technology, which is the culmination of progress of the country in missile production field, has been realized at the unflinching effort of domestic engineers in IRGC Aerospace Force.”

Pointing to the unveiling IRGC’s underground ballistic missile production facility for the first time in the country, he said, “Giving a harsh response to baseless and unfounded remarks of Western countries is the main objective behind unveiling country’s advanced ballistic missile.”

General Jafari said Iran declares its full defensive power at the threshold of 40th victory anniversary of the Islamic Revolution, adding, “Iran’s defensive capability is deterrent and is in line with maintaining national security, so that country’s defense power is nonnegotiable.”

The footage released to the media, displayed production of Iran’s new surface-to-surface ballistic missile, Dezful. The new ballistic missile has a range of 1,000 kilometers and a 450-kilogram warhead.Dezful is a version of the Zolfaghar missile that has a 700km range.

“The range of Hoveizeh missile is over 1,350km and it is good for targeting ground targets,” Hatami said, addressing the ceremony.

He mentioned rapid reaction, low flight altitude, high precision in navigation and high destruction power as among the main features of the missile.

“Hoveizeh ground-to-ground cruise missile has been test-fired in a 1,200-km range and it managed to precisely hit the specified target,” Hatami said, adding that the missile will increase the Iranian Armed Forces’ capabilities and Iran’s deterrence power.

The missile is due to be delivered to the Islamic Revolution Guards Corps (IRGC) Aerospace Force.

Iran has gained self-sufficiency in manufacturing different types of missiles and weapons, but it has capped the range of its missiles to a maximum range of 2,000km.

Yet, after the US retreat from the nuclear deal and European states’ pressures and insistence on talks with Iran to limit its missile program, several top military commanders in Tehran warned that such pressures could backfire.

Then, five days later Lieutenant Commander of the Islamic Revolution Guards Corps (IRGC) Brigadier General Hossein Salami said that if Western powers seek to limit Iran’s missile power, the country will have no option but to expand its potentials in the strategically important field.

Salami made the remarks on February 3, when he reiterated that Iran’s strategy to maintain a cap on its missile power will change if the European Union and others seek to force the country into disarmament.

The remarks came amid statements by certain EU governments about the need for Iran to avoid long-range missile tests in order for the country to enjoy the economic benefits of a nuclear agreement it signed in July 2015 with world powers.

Iranian officials have repeatedly stressed that the US pressures have failed to force Tehran compromise and curb its defense and missile capabilities.

“We have (earlier) said about the missile issue that we will not compromise at all about our country’s defense issues and will not allow others to interfere in it,” Secretary of Iran’s Supreme National Security Council (SNSC) Ali Shamkhani said last month.

He, meantime, reminded that Iran’s missile capability is “defensive and deterrent”.

Shamkhani referred to the US President Donald Trump’s economic pressures against Iran with the aim of forcing the country to accept Washington’s irrational and hegemonic demands, and said, “We will not compromise our honor under Trump’s bullying. This is the clear message of the Iranian government to the White House; sanctions will no way serve as an instrument to enforce renegotiations on issues already agreed upon.”

“The missile power is not negotiable. This deterrence power has been created for the country and we do not hold talks about it with anyone at all,” General Hajizadeh said, addressing a forum in Tehran.

He underlined that Iran has not stopped missile tests, adding that they include long-range missiles too.