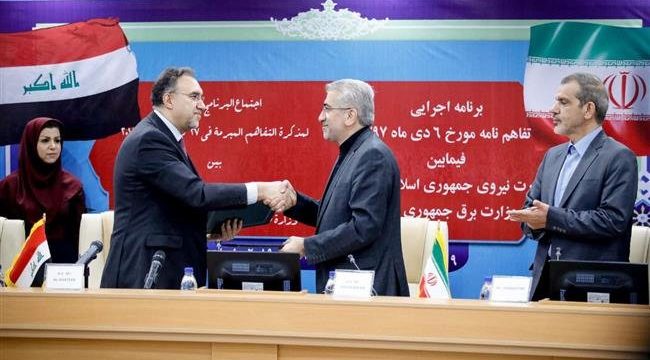 Press TV – Iran has signed an agreement to extend exports of 1,200 megawatts of electricity to neighboring Iraq.

The deal was inked by Managing Director of Iran’s state-run Organization for Management of Electric Power Generation and Transmission (Tavanir) Mohammad Hassan Motevalizadeh and the Iraqi deputy electricity minister in Tehran on Friday.

Iran’s Energy Minister Reza Ardakanian and Iraqi Minister of Electricity Luay al-Khatib also signed initial accords to boost cooperation in the fields of power production and exports as well as the transfer of power industry technology.

According to the Islamic Republic News Agency (IRNA), the official contract for electricity exports between Iran and Iraq was inked in 2005 with a 150-megawatt generation capacity. The contract has been extended every year.

Under the latest contract between the two countries, Iran exports 1,200 megawatts of electricity to Iraq every year through three power transmission lines in Basrah, Diyala and Amarah.

Iraq is the biggest importer of electricity from Iran. It needs more than 23,000 megawatts of electricity to meet domestic demand but years of war following the US invasion have left its power infrastructure in tatters and a deficit of some 7,000 megawatts.

Speaking to reporters on the sidelines of the signing ceremony of the agreements, Ardakanian said debts have been scheduled and repayments have started.

He added that the two sides signed a three-year agreement for increasing cooperation.

The Iranian minister said Tehran would cooperate with Baghdad on the reconstruction of the war-stricken country’s power industry and human resources’ training.

The governors of the central banks of Iran and Iraq recently signed an agreement on a payment mechanism which is to facilitate the settlement of Baghdad’s debts to Tehran.

The deal, signed in Baghdad on Tuesday by Iran’s Abdolnasser Hemmati and Iraq’s Ali Mohsen Al-Allaq, mainly focuses on a payment channel that is to facilitate the settlement of the Arab country’s debts to Tehran over gas and electricity imports, among others.