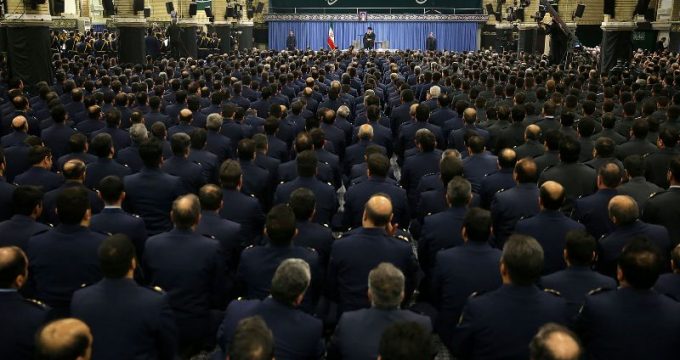 IRNA – Supreme Leader of the Islamic Revolution Ayatollah Seyed Ali Khamenei says the US regime is the embodiment of mischief, violence, causing crisis and waging war.

The US regime is the evidence of mischief and violence; it is causing crisis and wages war; (always) and not only today. The US regime’s survival has been depending on plundering in order to gain own profits. The US is standard bearer of mischief; and then there is complaint that why we say down with the US,’ said the Supreme Leader in a meeting with the IslamicRepublic Army’s Air Force commanders, pilots and other personnel on Friday morning.

Ayatollah Khamenei went on to say, ‘Down with the US means Down with you, a very few number of people who run the United States. American people is not our concern. Secondly, as long as the US continues to be hostile and mischievous, the ‘Down with the US’ will continue to be chanted by Iranian nation.’

Addressing the Iranian officials, Ayatollah Khamenei added,’ Do not trust the Europeans. In the matter of nuclear negotiations, I had already mentioned that the U.S. officials are not reliable. Today, the officials, who accepted to negotiate, admit that the Americans are not reliable. These days, there is a discussion concerning the Europeans and their proposals. My advice would be that they should not be trusted, just like the U.S. cannot be trusted.

The Commander-in-Chief of armed forces, Ayatollah Khamenei, reiterated, ‘About the U.S., at the time of the nuclear negotiations a few years ago, I frequently insisted— in private meetings with the officials and public gatherings—‘Do not trust the Americans, their promises, smiles and signatures; they are not trustworthy.’ Well, the result is that those officials who negotiated [with the U.S.] at that time are now saying that the U.S. is unreliable.

This news will be updated.