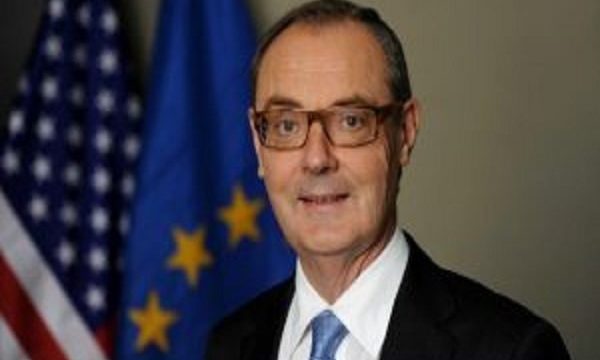 MNA – Expressing regret over the unilateral withdrawal of US administration from nuclear deal, European Union’s ambassador to the United States David O’Sullivan said trade and commerce with Iran is part and parcel of INSTEX.

David O’Sullivan, the European Union’s ambassador to the United States, wraps up his time in Washington at the end of February. The last two years of his tenure have been challenging ones for the transatlantic relationship. That challenge mainly comes from US President Donald J. Trump who once described the EU as a “foe.”

In an interview with the New Atlanticist, O’Sullivan expressed regret that US administration has withdrawn [from the nuclear deal]. We believe that as long as Iran respects the terms of the deal—in other words, that they continue to renounce definitively the possibility of acquiring or developing nuclear weapons—and as long as they are shown to be in verification by the very stringent inspections undertaken by the International Atomic Energy Agency, that they are then entitled to the quid pro quo of the deal, which is sanctions relief. Therefore, we believe that legitimate trade and commerce with Iran is part and parcel of that deal.

“We regret the US decision, but we hope that just as we respect their decision to withdraw, they will respect our right to continue to work within the terms of the deal which has been sanctioned and approved by the United Nations and all the other participants,” he added.

Regarding the possibility of saving Iran nuclear deal through SPV mechanism, O’Sullivan said “one of the consequences of the withdrawal of the US is the re-imposition of sanctions. When the US does sanctions they can be quite wide-ranging and far-reaching. Companies trying to deal with Iran on issues which are not subject to Iran find that it can be quite cumbersome and complicated.”

He said that the special vehicle has been designed to provide a streamlined means of, particularly, trading with Iran. This vehicle has now been created, but the full technical details need to be worked out. It is a creation of three countries—France, the UK, and Germany. I think it will be open to other countries to join.

It is essentially a mechanism designed to allow European companies undergoing legitimate trade to do so in workable conditions, which is not currently the case, he noted.

Regarding the US response to the SPV, O’Sullivan said “we have had good discussions on the sanctions issue. We have been able to agree a number of exemptions to the sanctions to take into account European concerns. This will be an ongoing issue between us in the coming months and years as to how this is done in practice.”