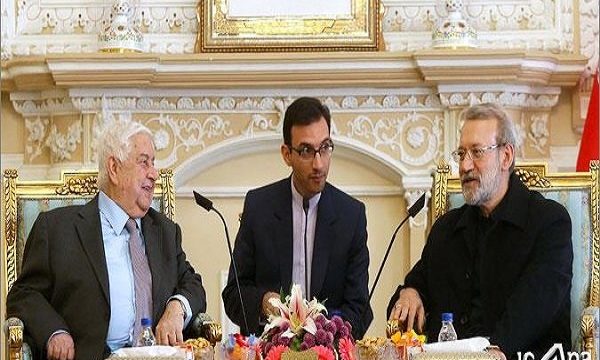 MNA – Today, the Syrian people’s resistance against adventures of the enemies has been fruitful, according to Iranian parliament speaker Ali Larijani in a meeting with visiting Walid al-Moallem.

In the meeting, Larijani said that the bilateral relations between Iran and Syria are growing, expressing hope that growing trend of relations would continue.

The Iranian parliament speaker said that Iran is pleased with the progress made regaridng Syria’s political issues, as well as the fight against terrorism.

The Syrian people’s resistance against adventures of the enemies has been fruitful, the Iranian top legislator said.

He further stressed the need for expanding bilateral economic relations between the two countries, calling for the expansion of bilateral trade relating this year.

The Syrian foreign minister, for his part, congratulated the anniversary of the victory of the Iran’s Islamic Revolution, saying that the revolution had positive impact on the whole region.

Walid al-Moallem hailed Iran’s help in the victory against terrorism, saying that the victory over terrorism has angered the Israelis and Americans.

The foreign minister further condemned the unjust US sanctions on Iran, assuring the Iranian side that the sanctions will fail.

The Syrian top diplomat further referred to the issue of the US troops withdrawal from Syria, saying that the US troops have increased in his country contrary to the claims.