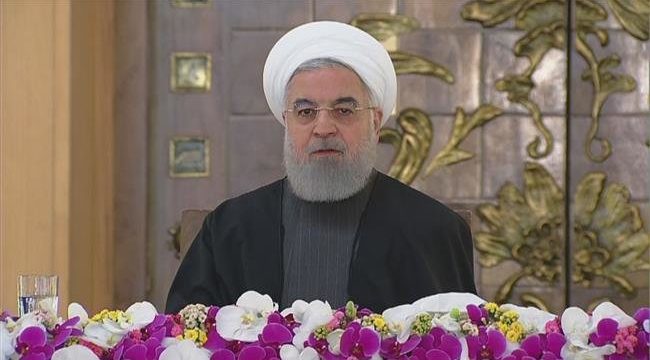 Press TV – Iranian President Hassan Rouhani renews Tehran’s call for a Middle East free of nuclear weapons and other weapons of mass destruction, urging an end to foreign interventions in the region.

“Our slogan is a Middle East free of nuclear weapons and [other] weapons of mass destruction, and we have been standing firm in this regard for more than 40 years,” Rouhani said.

Rouhani made the remarks while delivering a speech to foreign dignitaries and ambassadors in Tehran on Wednesday on the occasion of the 40th anniversary of the Islamic Revolution.

“Our slogan is that the presence of foreign troops in the region and their interventions must end,” Rouhani added. “Our slogan is a world free of violence and extremism” as it was stressed in the World Against Violence and Extremism (WAVE) resolution submitted to the UN by Tehran.

In December 2013, the UN General Assembly overwhelmingly voted to approve President Rouhani’s WAVE proposal, which called on all nations across the globe to denounce violence and extremism.

Iran’s Ambassador to the UN Gholamali Khoshrou submitted to the world body an updated version of the WAVE in December 2015.

Khoshrou said the consensus on the draft and support for it on the part of various countries indicates that the UN must take immediate action for containing violence and extremism in the world.

Elsewhere in his remarks, Rouhani said that Iran’s foreign policy is based on respecting other countries’ rights while countering any foreign intrusion in its affairs, adding, “Based on this, we do not dominate others and do not accept any domination either.”

He said that Iran seeks good ties with friendly countries across the world irrespective of their religions.

“The Iranian nation never intended, neither in the past 40 years nor before that, to launch aggression against their neighbors or other countries, and whenever our neighbors needed help, we offered them assistance … without any expectations or anything in return,” he added.

Rouhani also pointed to the 2015 nuclear agreement between Iran and major world powers, and said Iran has complied by all of its agreements it has ever signed, including the Joint Comprehensive Plan of Action, which he said was well indicative of Tehran’s living up to its commitments.

He, however, took a swipe at the US for its withdrawal from the Iran nuclear deal, officially known as the Joint Comprehensive Plan of Action (JCPOA), saying Washington has failed in this historic test and reneged on its obligations.

“Under chimerical excuses and in defiance of all regulations, the US has created problems for itself,  the Iranian nation, regional countries, Iran’s partners as well as …. its own world and regional partners,” the Iranian president said.

“Despite US’s infringements and although Europe has acted so weakly and inefficiently in implementing its commitments, the Islamic Republic of Iran honors its obligations, which means that ethics and moral and political obligations are of high significance to Iran,” Rouhani said.

He also criticized Washington for its “illegitimate sanctions” against Tehran and said the US has been doing its utmost to pile up pressure on and frustrate the Iranian nation but stressed that the Iranian people “are more united than ever.”

Rouhani said that since the victory of the Islamic Revolution four decades ago, the US has been trying to employ all it has in power against Iran as they lost a great ally and a base in the region, but added that they have failed in all fronts against Iran due to their “miscalculations.”

Underling that Iran seeks friendly ties with the world, Rouhani said that the Islamic Republic will even accept a US apology and repentance despite Washington’s history of aggression.

“If the US expresses penitence too and rectifies its previous approach, makes precise calculations, apologizes for its previous interventions in Iran, is ready to accept the grandeur and dignity of the Iranian nation and the great Islamic Revolution and speaks to the Iranian nation respectfully, we will be ready to accept its repentance despite its years of oppression against us,” he said.

President Donald Trump of the United States withdrew Washington in May from the JCPOA, reached between Iran and the P5+1 group of countries in 2015, and decided to re-impose unilateral sanctions against Tehran.

Following the US pullout, the European signatories to the JCPOA as well as China and Russia pledged their commitment to the deal and vowed to keep it alive.

The Europeans issued a joint statement on January 31, announcing the launch of a long-awaited direct non-dollar payment mechanism meant to safeguard their trade ties with Tehran in the face of the sanctions.

Following months-long preparations, the foreign ministers of France, Germany and Britain finally unveiled the mechanism, officially called the Instrument in Support of Trade Exchanges (INSTEX), after a summit in Bucharest, Romania.

Iran and its three European partners in the JCPOA will soon begin talks in Paris, France, in an effort to work out the operational details of INSTEX.

On a visit to Paris on Tuesday, Iranian Deputy Foreign Minister Abbas Araqchi reached an agreement with French officials to hold a first round of expert-level discussions in the near future on INSTEX.

The mechanism has been registered in Paris and will be jointly financed by the three European countries and run by a German banker. It is initially intended to be used for selling food, medicine and medical devices to Iran, but it could be expanded to cover other areas of trade in the future.