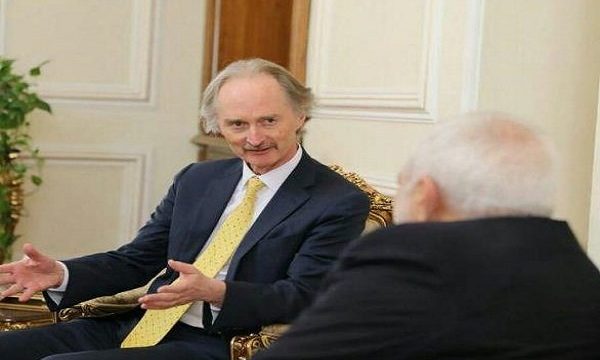 MNA – The Iranian Foreign Minister Mohammad Javad Zarif held a meeting with the Geir O. Pedersen, the UN special envoy for Syria in Tehran on Tuesday to discuss Syrian issues.

In the meeting between Mohammad Javad Zarif and Geir Pedersen, which took place in Tehran on Tuesday afternoon, the two sides discussed a variety of issues related to Syria.

The two sides discussed and exchanged views on various issues related to Syria, including the new constitution and the future of Syria, the reconstruction of the country, the return of the Syrian refugees to their homes, political reform and the fight against terrorism, the withdrawal of American troops from Syria, and the continuation of Iran’s cooperation with the United Nations to resolve remaining problems in Syria.

Separately, earlier today, the Iranian top diplomat held a meeting with his Syrian counterpart Walid al-Moallem, who is visiting Tehran within the framework of the continuous coordination and consultation between Syria and Iran.