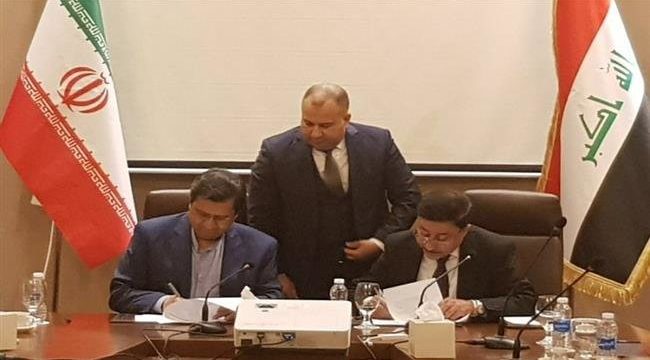 Press TV – Governors of the central banks of Iran and Iraq on Tuesday signed an agreement on a payment mechanism which is to facilitate the settlement of Baghdad’s debts to Tehran.

The deal, signed in Baghdad by Iran’s Abdolnasser Hemmati and Iraq’s Ali Mohsen Al-Allaq, mainly focuses on a payment channel that is to facilitate the settlement of the Arab country’s debts to Tehran over gas and electricity imports, among others.

The two sides inked the agreement following negotiations between members of their delegations in Baghdad’s Al Rasheed Hotel.

Upon arrival in the Iraqi capital Tuesday, Hemmati told IRNA that his trip was aimed at removing the obstacles that hinder the settlement of Iraq’s debts to Iranian exporters.

“Currently, we’re witnessing a considerable volume of exports [from Iran to Iraq] in both public and private sectors, but there are shortcomings in banking and monetary exchanges, which have created problems for [Iranian] exporters,” he said.

In addition to natural gas and electricity, Iraq imports a wide range of goods from Iran including food, agricultural products, home appliances, and air conditioners.

The value of Iranian imports to Iraq was about $6 billion for the 12 months ending March 2018, about 15 percent of Iraq’s total imports for 2017.

The energy contracts between the two countries also contributed to a volume of trade of $12 billion last year.

Iran is currently Iraq’s top trade partner, having sharply increased their trade exchanges in recent months despite US sanctions on the Islamic Republic.

The US government in November re-imposed unilateral sanctions against the Islamic Republic of Iran and urged all countries in the world to stop doing business with Iran.

However, in a bid to meet its energy needs, Baghdad requested the US to exempt the Arab country from its unilateral sanctions against the Islamic Republic, and was finally granted a 45-day waiver, which was later extended for another three-month period.

After giving the waiver, the US said that Iraq could continue to import natural gas and energy supplies from Iran as long as it did not pay Iran in US dollars.

Therefore, the country officially removed the US dollar in trade with Iran, and started working on the use of local currencies in its economic ties with Tehran.

Iran’s Tuesday deal with Iraq on facilitating financial exchanges came a few days after the European signatories to the 2015 Iran nuclear deal formally announced the launch of a long-awaited direct payment mechanism meant to safeguard their trade ties with Tehran in the face of the “toughest ever” American sanctions.

“France, Germany and the United Kingdom, in accordance with their resolute commitment and continued efforts to preserve the Joint Comprehensive Plan of Action (JCPOA) endorsed by United Nations Security Council resolution 2231, announce the creation of INSTEX SAS (Instrument for Supporting Trade Exchanges), a Special Purpose Vehicle (SPV) aimed at facilitating legitimate trade between European economic operators and Iran,” the three foreign ministers said in a joint statement,” they said in a joint statement.

France, Germany and the UK are the initial shareholders of the INSTEX mechanism for trade with Iran, which has been registered in the French capital, Paris, with a capital of 3,000 euros, and will be governed by a German banking expert, according to AFP and German media.

INSTEX is designed to pave the way for European firms to do business with Iran while evading the strict sanctions the US re-imposed against Iran last year after leaving the 2015 multinational nuclear deal, formally called the Joint Comprehensive Plan of Action (JCPOA).