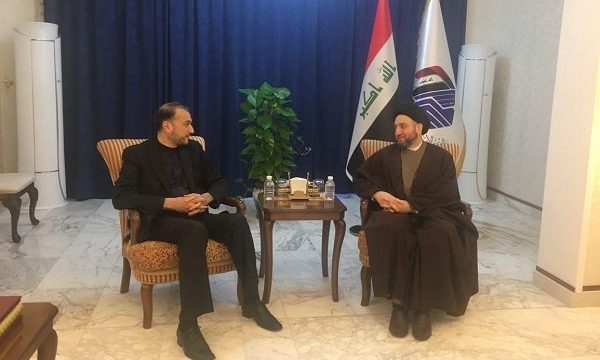 MNA – Head of the National Wisdom Movement of Iraq Ammar Hakim censured the US efforts to undermine relations between Tehran and Baghdad, and thanked Iran for its constructive role in supporting Iraq.

He made the remarks in a meeting with Special Assistant to the Speaker of the Iranian Parliament for International Affairs Hossein Amir-Abdollahian on Tuesday in Baghdad.

“Fortunately, now all parties in Iraq are moving toward unity and synergy,” he said. “Political sustainability in Iraq is created when groups and parties come together.”

He said the terrorists’ infrastructures have been destroyed, but they are still present in Iraq, which requires Baghdad to continue with its plan to combat terrorism.

“The interventionist remarks by the US authorities and attempts to undermine the relations between Tehran and Baghdad are not acceptable, and Iraqi officials have reacted to these positions,” he said.

The Iranian official, for his part, deemed Tehran-Baghdad ties strategic and stable, adding “we consider Iraq’s security as the security of Iran and the region.”

“Fortunately, post-ISIL Iraq has been on the path to progress and Tehran will always support a stable, secure and independent Iraq,” he stressed.

“The problem with our region today is the foreign intervention and lack of a constructive regional dialogue,” he added.