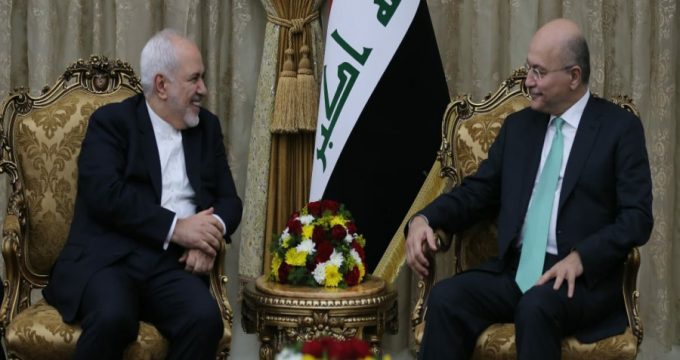 Why Iran needs to boost its diplomatic activities

Iranian Diplomacy – Professor Arshin Adib-Moghaddam, Chair of the Centre for Iranian Studies at the London Middle East Institute believes that Iranian foreign policies after the revolution are a very good case study for a deeper understanding of IR, one that appreciates the impact of norms and ideas.

Professor in Global Thought and Comparative Philosophies and Chair of the Centre for Iranian Studies at the London Middle East Institute, also adds that “Iran totally changed its foreign policy after the revolution in terms of the grand strategic preferences of the state exemplified in a shift of alliance patterns (break from proclivity to US indicative of the Shah period), support for the Palestinian cause etc.”

He adds that “There is simply not enough activity by the Iranian diplomatic missions abroad.”

Q: According to Constructivism, A country’s foreign policy is affected by its identity. Based on this assumption, what significant differences appeared on Iran’s foreign policy after Islamic Revolution?

A: In fact, Iranian foreign policies after the revolution are a very good case study for a deeper understanding of IR, one that appreciates the impact of norms and ideas. Iran totally changed its foreign policy after the revolution in terms of the grand strategic preferences of the state exemplified in a shift of alliance patterns (break from proclivity to US indicative of the Shah period), support for the Palestinian cause etc. I have explained this in my first book The International Politics of the Persian Gulf. This approach is a part of my teaching at SOAS, and every year I have hundreds of students who use IR theories analyze the foreign policy of regional countries, in particular Iran.

Q: What is your assessment of Islamic Republic of Iran’s foreign policy in “Look East” doctrine and what are the elements of this sort of foreign policy?

A: Iran’s pivot to the East is a natural effect of at least three factors: First, the revolution and its emphasis on widening the Iranian foreign policy orbit to include emerging powers in Asia. Second, and interdependent to the former, the fact that Iran is as much an Asia power as it is a “Middle Eastern” one in terms of geography and traditions. And lastly, the recurrent aggression of US governments and their inability to accommodate Iran as an independent, rather than subservient actor as it was the case under the Shah. I believe that the government of President Rouhani should do more to cultivate relations with Asian countries. I should add, that Iran has a lot in common with Latin America too, certainly in terms of political culture and there needs to be more diplomatic activity in that regard as well especially right now as we are witnessing an aggressive effort of the Trump administration to return South America to the bad old days of semi-colonial submission.

Q: What is your assessment of Islamic Republic of Iran’s foreign policy in the Middle East especially in the Persian Gulf? What are the different components of this policy in regard with the region?

A: Iran has failed to pacify its relations with Saudi Arabia which is not only due to the intransigence of the Saudi leadership. I have repeatedly called for a positive cultural diplomacy in the absence of official relations. There need to be joined cultural festivals in the arts and movies for instance – as secular as possible, given that religion has been more of a dividing, rather than uniting factor among Muslims.

Q: Since the Islamic Revolution, Iran-Europe relations have dramatically changed. What are the major changes?

A: Iran acts as an independent regional superpower, whereas before it was a dependent actor. What is absolutely crucial is that Iran uses its foreign embassies more effectively in support of a cultural diplomacy that highlights the crucial interdependence that Iran and Europe share since antiquity.

Iran is also a European country in the sense that it has been a part of the European imagination at least since the Greco-Persian wars, repeatedly as the “Other”, but also as the epitome of culture and sophistication as in the poetry of Goethe in his East-Western Diwan. Iranians have lost this reputation due to some of the reckless policies of the state after the revolution and up until today.

There is no doubt that mistakes were made, inhuman ones that did not sit well with the ideals of the revolution. To repair this image of Iran, which the enemies of the country have been easily exploiting, requires a sophisticated PR campaign based on the realities and truths of contemporary Persia rather than the propaganda by the anti-Iranian lobby. This is probably the most important pre-requisite for a successful global diplomacy for the Iranian state.

Q: Iran had first a critical dialogue with the European Union. It then changed it for a constructive dialogue. Now the question is that how much this relationship is affected by the U.S.?

A: Apart from the Obama administration, all of the US governments acted as spoilers of closer Iranian-European relations. These US governments act vis-à-vis Iran in a distinctly irrational and hypocritical way. There is no doubt about that. But they are only able to do so because of some of the weaknesses in Iran’s global strategies as indicated above. There is simply not enough activity by the Iranian diplomatic missions abroad, especially when I compare it to the period of President Khatami when the embassies were by far more active.

Q: Some experts believe that balancing Iran’s foreign policy between east and west will provide Iran’s national interests. What is your opinion on this matter?

A: I had talked about this issue with Iranians before. The revolutionary slogan “neither East nor West” which was necessary to proclaim Iranian independence at that time, has to be changed more systematically into a policy of “both East and West”. As a part of this strategy, the Rouhani administration is well advised to zoom closer into Asia and Latin America. Mind you, the latter IS in the so called “West”, so Latin America is as crucial to Iranian interests as Asia is.