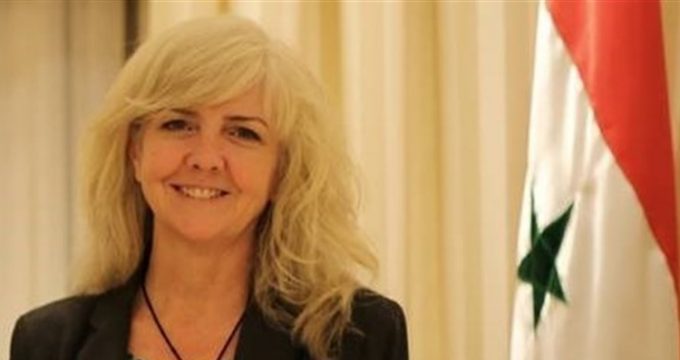 US well-versed in using terrorist groups as assets: American activist

Tasnim – A peace activist and journalist based in the US state of Virginia warned of a “very dangerous” plot hatched by Washington to raid Iran by using Daesh (ISIS or ISIL) terrorists in Afghanistan and said the US is “well-versed in using terrorist groups as assets”.

“I would be very concerned that there is some kind of grand plan going on that will not be good for the people of Afghanistan, probably, won’t be good for Iran,” Janice Kortkamp from Leesburg, Virginia, said in an interview with the Tasnim News Agency.

“Perhaps, there will be raids launched from across the border from Afghanistan into Iran using ISIS and the US can just completely wash his hands up at all because they’ll say ‘oh we pulled our troops out and we’re not in there anymore’,” she said, adding, “So we (the US) are well-versed in using terrorist groups as assets as has also been proven in that history of the Afghan wars.”

Janice Kortkamp became an independent, completely self-funded, journalist after “seeing Western media bias regarding Syria and how that bias was promoting war and destabilization in Syria and all the Levant”. She has researched the current crisis for six years, putting in over 7,000 hours of study. She has visited Syria five times over the past three years, spending months traveling around the major population areas and the outskirts of Damascus, Homs, Latakia (including Kessab), Hama, Palmyra, Deir Ezzor and Aleppo. She has also gone to Germany, Lebanon, and Kuwait to meet with Syrian refugees and emigrants. Through friends and contacts in Syria as well as reports from genuine news sources around the world, she tracks the situation on the ground in Syria on an hourly basis.

Tasnim: Recent evidence shows that the Daesh (ISIS or ISIL) terrorist group is on the rise in war-torn Afghanistan with the support of the US government. According to Tasnim dispatches, a large number of prisoners, all of whom senior members of Daesh, recently broke out of a Taliban prison in northwest Afghanistan after US troops helped them escape through a covert operation. Given that Daesh’s so-called caliphate has collapsed in Syria and Iraq, what goal is Washington pursuing by transferring the terrorists to Afghanistan and strengthening them?

Kortkamp: Well, of course, this is a difficult question to answer because we don’t have a lot of information. All we have are clues and previous actions and policies. Obviously, Washington is well known for having assets like ISIS. We’ve been working with them and aiding and abetting them in Syria and we, you know, really incubated the group in Iraq and we’ve been aiding and abetting al-Qaeda as well in Syria and other terrorist groups in Libya, for example. So we are well-versed in using terrorist groups as assets as has also been proven in that history of the Afghan wars. So, you know, basically, the answer to the question is the goal is probably not a good goal. The goal is probably to create problems. It’s interesting that this comes alongside these recent negotiations between the US and the Taliban. I think it’s also an important factor that it seems like John Bolton and Mike Pompeo support this idea of pulling US troops out of Afghanistan and negotiating with the Taliban. That seems to be antithetical to their typical stand of wanting to just go to war with anybody and everybody and particularly if there’s some kind of perception that an action could be used to further isolate Iran for Israel’s sake. So given the fact that Pompeo and Bolton appear to be on board with this idea that there is somewhat of a consensus in Western media in favor of the plan of pulling out the troops, if you combine that with this idea of breaking ISIS prisoners out of a jail, what we’ve done with ISIS in Syria, for example, and using them as an asset and also this idea of perhaps Eric Prince with a mercenary force basically taking over the US military role in Afghanistan, I think that there are more questions right now than I have answers for but I would be very concerned that there is some kind of grand plan going on that will not be good for the people of Afghanistan, probably, won’t be good for Iran. Perhaps, there will be raids launched from across the border from Afghanistan into Iran using ISIS and the US can just completely wash his hands up at all because they’ll say ‘oh we pulled our troops out and we’re not in there anymore’. I think this is very dangerous and only time will tell really from here on what happens with all of these different factors going on.

Tasnim: As you know, some regional countries, including Iran, have been sensitive about the presence of Daesh in Afghanistan due to their national security concerns. How justifiable do you see their concerns?

Kortkamp: I think I explained that a little bit in my previous answer but you know, having observed Iran and other parties involved in these conflicts over the last several years, I would say if Iran is concerned or is sensitive to a threat then that threat is most likely very real again Pompeo and Bolton the whole reason for their existence seems to be the defense of Israel, the support of Israel, what Israel wants Israel gets, and yet then we have what appears to be the opposite strategy going to take place in Afghanistan with their support. So I’m suspicious. I’m sure the leadership in Iran is suspicious that’s a very difficult border I’m sure to protect and you know, the security issues are going to be high now. If ISIS is gaining more and more of a presence in Afghanistan, that is a significant problem for Iran.

Tasnim: Do you think that Daesh would be able to establish a foothold in Afghanistan given the fact that the Muslim people in the country are strongly opposed to them and their extremist ideologies?

Kortkamp: You know this is a difficult question also because as we know Afghanistan is very tough terrain. The people have been through a quite a bit of war so many decades now of war. The economy I’m sure is terrible and there are probably a lot of people that would succumb to temptations of money and I would suspect that with the US helping Daesh, certainly, Saudis are probably helping Daesh, then you know, you have this situation where there could be a lot of money available to people to join that terrorist group and desperate people are more easily tempted by that. Also, you have the fragmentation and the weakness of Afghanistan’s government. You have, you know, just a warlord mentality that is present in much of the country and people might tend to go with a strong man that they feel can protect them or out of fear of needing to submit to a strong man. I’m struggling a bit because these are all very complicated issues in Afghanistan particularly you know is the graveyard of empires and nobody can really predict I think what is going to happen now but personally, I’m highly skeptical and cynical of what any plan of the US may be doing there. We’ll just have to keep our eyes on it.