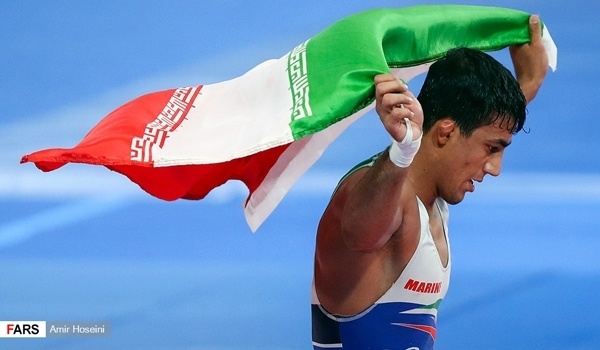 FNA – Iran’s national squad of Greco-Roman wrestlers won the title at the 2019 ‘Vehbi Emre & Hamit Kaplan’ tournament in Istanbul, Turkey, with a total tally of 4 gold and 3 bronze medals.

On Sunday, the final day of the event, Hamed Tab in the 67kg category, Mohammad Hadi Saravi in 87kg, and Amir Ghasemi in 130kg managed to overpower their rivals in the final match and collect add three gold medals to Iran’s tally.

Vehbi Emre & Hamit Kaplan tournament kicked off on Feb. 01 and wrapped up today. More than 200 wrestlers from 11 countries participated in the event. Ten wrestlers represented Iran in the tournament and only three of them ended the campaign without a medal.

Amin Kavianinejhad of Iran’s national outfit overpowered his Turkish rival in the final and won the gold medal in the 72kg weight category.

Pouya Naserpour in the 55kg weight division, and Saeid Abdevali in the 82kg category, won two bronze medals for Iran after defeating rivals from Turkey and Bulgaria respectively.

The final and third-place matches of five remaining weight categories will be held today. Three Iranian wrestlers Hamed Tab, Mohammad Hadi Saravi, and Amir Ghasemi will compete for the gold and Mehdi Mohsennejhad is set to wrestle for the bronze medal.

Vehbi Emre & Hamit Kaplan tournament kicked off on Feb. 01 and will wrap up today. More than 200 wrestlers from 11 countries are participating in the event.

In a related front, earlier on December 21, an Iranian team claimed the title at Greco Roman Wrestling Clubs Cup 2018, ahead of teams from Georgia, Iran, Ukraine, Serbia, and Kyrgyzstan.

Bimeh Razi, the reigning champion of the event, gained a commanding victory 8-2 over Russia in the final bout. The team had also clinched the title in 2015 edition of the games.

Teams from Georgia, Iran, Ukraine, Serbia, and Kyrgyzstan ranked next.

World Wrestling Clubs Cup was initiated in 2014 upon the proposal of Islamic Republic of Iran Wrestling Federation. Teams from Iran, USA, Turkey, Georgia, and Kyrgyzstan annually participate in the event.

Wrestling is one of most popular sports in Iran, and Iranian wrestlers are among the best practitioners of the field in the worlds, bringing home countless medals and titles in a regular basis.