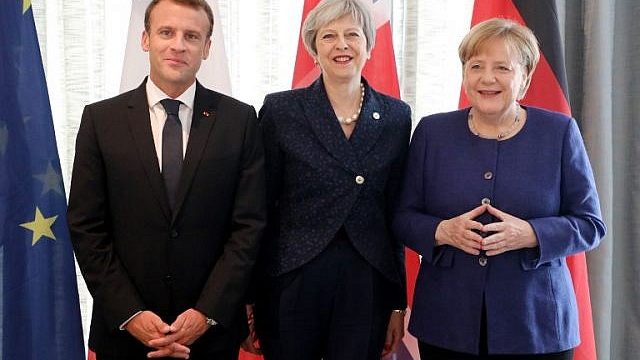 Iran’s nuclear chief has urged Europe to accelerate the launch of a promised trade mechanism aimed at bypassing US sanctions before it becomes too late.

‘If Iran had not been in Syria, ISIL would have formed gov. in region’

Iranian First Vice-President Es’hagh Jahangiri said that If Iran had not operated in Syria, ISIL terrorists would have now formed a government and would have power in the region.

Iran may switch to ‘offensive’ to protect national interests

Major General Mohammad Bagheri, Chief of General Staff of Iranian Armed Forces, said Sun. that Iran may switch from its defensive policy to ‘offensive’ tactics if its national interests come under threat.

Army deputy commander: Iran not to wait for enemies to attack

Iranian Army Deputy Commander Rear Admiral Habibollah Sayyari underlined that the Ground Force’s Eqtedar 97 wargames staged in the weekend showed that the country is fully prepared to repel any aggression.

The Leader of the Islamic Revolution Ayatollah Khamenei has praised the performance of the Islamic Propagation Center of Qom Seminary, adding that the Qom Seminary is expected to present solutions to religious problems and clarify ambiguities.

In reaction to French foreign minister’s recent remarks, Iranian Foreign Ministry’s spokesman has reiterated that Iran is serious about its defense issues, relating the missile capabilities to territorial integrity and preserving people’s fate.

Araghchi leaves for three-nation tour, meeting with Amano on agenda

Iranian Foreign Minister Zarif said Mon. that the country had obtained enough guarantees from the US before signing the nuclear deal, but Trump administration decided to abandon it anyway like many other treaties.

Iran has managed to offset all the enormous efforts by the US and the Zionist regime who employed all their means to pressure the country, Iran’s Foreign Minister Mohammad Javad Zarif said on Monday.

Iran’s Deputy Foreign Minister Abbas Araqchi and the Director-General of the International Atomic Energy Agency (IAEA), during a meeting in Vienna on Monday, discussed cooperation between Tehran and the Agency within the framework of Iran nuclear deal (JCPOA).

Iranian Defense Minister Brigadier General Amir Hatami reiterated that holding negotiations on the country’s missile and defense power is out of the question.

ecretary of the Supreme National Security Council Rear Admiral Ali Shamkhani said Iran has no intention to increase the range of its missiles according to its defense doctrine.

Iran’s best achievements made in defense sector despite sanctions: IRGC

The spokesman for the Islamic Revolution Guards Corps (IRGC) highlighted Iran’s self-sufficiency in the military sphere and said the “most outstanding achievements” of the country have been made in the defense sector that has been the target of the most severe sanctions.

Chief of Staff of the Iranian Armed Forces said the enemies know well that they would receive a devastating response from Iran in case of military action against the country.

Iranian Foreign Ministry Spokesman Bahram Qassemi said an anti-Tehran conference that Poland is going to co-organize with the US in Warsaw next month is aimed at creating division among Europeans.

Leader of the Islamic Revolution Ayatollah Khamenei visited the holy shrine of Imam Khomeini and Behesht-e-Zahra martyrs’ cemetery this morning.

On the occasion of the 40th anniversary of the Islamic Revolution, Iranian President Hassan Rouhani together with his cabinet members renewed allegiance with the late Imam Khomeini, the Founder of the Islamic Republic in Iran.

Iran nuclear organization has no coop. with military sectors: Salehi

Iranian nuclear chief, Ali Akbar Salehi, said the Atomic Energy Organization of Iran has no cooperation with the country’s military sectors, stressing that all of AEOI’s projects are for peaceful purposes.

France, Germany and Britain have set up a European mechanism for non-dollar trade with Iran to avert U.S. sanctions, although diplomats acknowledged it is unlikely to yield big commercial transactions Tehran says it needs to keep a nuclear deal afloat.

Iran’s Armed Forces have unveiled new military hardware, including drones and missiles, during an exhibition ahead of the 40th anniversary of the 1979 Islamic Revolution.

Nobody can harm us as long as we follow Supreme Leader

President congratulated the 40th anniversary of the victory of the Islamic Revolution and said, “Trusting people was the Late Imam Khomeini’s highest skill”.

Iranian people have started the 10-Day Dawn celebrations to mark the 40th anniversary of the country’s 1979 Islamic Revolution, which overthrew the monarchy of the US-backed Pahlavi regime in Iran.

Iranian Foreign Minister Mohammad Javad Zarif chided the United States on Friday for saying it may leave an arms treaty with Russia, and said on Twitter that “any deal with US (government) is not worth the ink”.

Iranian armed forces have put on the agenda military diplomacy as one of the ways to develop relations with other countries, Deputy Commander of the Islamic Republic Army for Coordination Affairs said.

Iranian Foreign Minister Mohammad Javad Zarif blasted the European states for their lack of courage to stand against the US pressures to fully implement the 2015 nuclear deal, saying that the EU has sustained a strategic loss.

Iranian Minister of Roads and Urban Development Mohammad Eslami and an accompanying delegation conferred with Syrian Prime Minister Imad Khamis on Sun. on means of boosting economic and investment cooperation between Syria and Iran.

Cosmo Oil has started loading its first Iranian crude oil cargo, the latest Japanese refiner to resume import of Iranian oil more than two months after the US sanctions waiver was granted, a source with direct knowledge of the matter said on Monday.

The latest report unveils Iran’s upcoming move of launching state-backed cryptocurrency this week. The move is intending to skirt US sanctions and SWIFT payment system.

Iran will build several power plants in Syria within the framework of a memorandum on economic cooperation with Damascus, the construction of first power plant will start in Latakia on Tuesday, Iran’s First Vice-President Eshaq Jahangiri said Monday.

Russia: US using terrorists in Syria to serve its geopolitical interests

The Russian Foreign Ministry said that the United States is using terrorists in Syria to serve its geopolitical interests.

Syrian FM: Macron should dedicate his efforts to resolve crises in his own country

The statements made by French President Emmanuel Macron confirm the continuation of the failed policies adopted by the consecutive French government regarding Syria, a source at the Foreign and Expatriates Ministry said on Monday.

UN investigator in Khashoggi case demands access to Saudi consulate in Istanbul, not allowed yet

A United Nations expert who has been assigned to investigate the state-sponsored assassination of Saudi Arabian dissident Jamal Khashoggi says she has requested access to Riyadh’s consulate in Istanbul, where the critic was brutally killed, but has not heard from Riyadh yet.

Sayyed Hassan Nasrallah, Secretary-General of the Lebanese resistance movement Hezbollah, sat down for a long-awaited interview with the Beirut-based Al-Mayadeen TV station, on Saturday night, to discuss wide-ranging topics, including his health and Israeli regime’s border operation and Syria invasion.

The representative of Leader of the Islamic Revolution in Hajj and pilgrimage affairs said Iranian pilgrims can visit Syria’s holy sites in the near future, several years after the pilgrimage to the Arab country was halted due to the protracted war there.

The national Iranian football team has heavily lost to Japan in the semifinals of the 2019 Asian CUP to fail to reach the final match after decades.

Euphoria in Isfahan as water flows into Zayanderud

While water is released into Zayanderud river, central province of Isfahan, the citizens are exhilarated by seeing the river alive again.