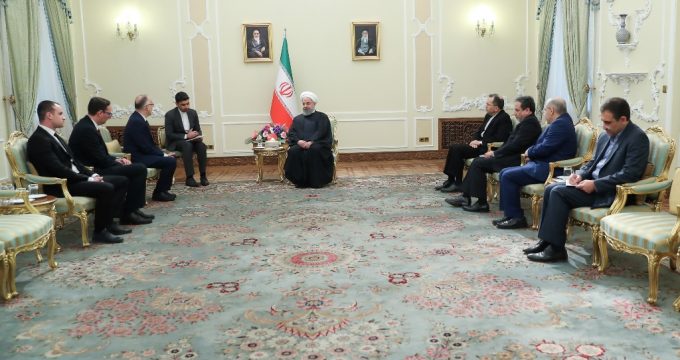 US sanctions not to affect Iran’s ties with world: Rouhani

IRNA – Iranian President Hassan Rouhani emphasized that the era of American misconduct is very short and the US sanctions can not influence Iran’s relations with the world.

While receiving the credentials of the new Croatian ambassador Draga Stanbuk on Saturday, Rouhani pointed out that today the European Union has taken the initial step, albeit with a great deal of delay, in the financial ground, noting, ‘Of course, we are happy that the European Union could prove to have independence in the face of the angry face of America Indeed. Today the world is facing the White House, whose leaders do not even accept their important intelligence and security personalities.”

The Iranian president said that Tehran wants close relations with Croatia in all areas.

‘The Islamic Republic of Iran and Croatia have deep cultural and historical relations,’ President Rouhani added.

‘Today, the world and international organizations condemn the White House and we will certainly pass through these issues, and we do not care about that,’ the high-ranking official said while pointing to the illegal US sanctions re-imposed on the Iranian nation. ‘We believe that the US actions are detrimental for the companies and nations of the world whose will is to strengthen relations with each other, and there is the troublesome US that intends to disrupt relations between nations and governments.”

The president emphasized the strengthening of Tehran-Zagreb’s economic relations, and said that the two countries could have a great deal of cooperation in the area of energy and financial affairs.

After submitting his credentials to President Rouhani, new Croatian ambassador in Iran Draga Stanbuk, for his part, referred to the recent EU decision on financial matters, and said that Croatia is pleased with the decision of the European Union which could strengthen and expand relations between the two countries.