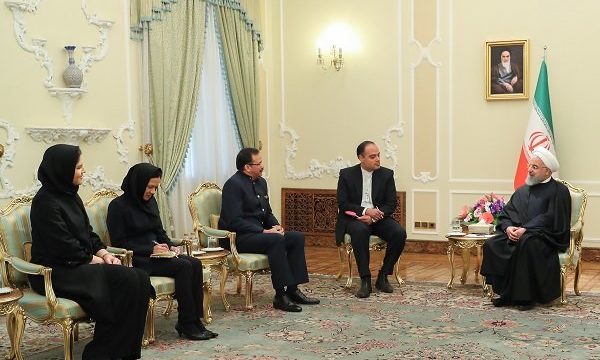 MNA – Iranian President Hassan Rouhani said that the unity between the Venezuelan government and people will foil the conspiracies organized by the United States.

Rouhani made the remarks Saturday in a meeting with the new Venezuelan Ambassador to Tehran Carlos Antonio Alcala Cordones after receiving his credentials.

President Rouhani reaffirmed Iran’s support of the legitimate government in Venezuela and stressed that the unity among the people of the country is very important for the Venezuelan nation to be victorious and prove it to the Americans that they will not let them interfere in their country’s internal affairs.

“We support Mr. Maduro’s legal government and believe that the people of Venezuela will foil this plot with unity and standing by their government,” the official website of Iran’s presidency quoted Rouhani as saying.

“Americans do not tolerate even other powers in the world, and we are seeing their imperious behavior towards Russia, China, and even Europe.”

Describing the new way that Americans are pursuing by establishing a government in the Venezuelan government as heinous, he said, “we had seen Americans conducting velvet revolutions, but this way of interfering in Venezuela is a new one.”

He also referred to the good relations between Tehran and Caracas, adding, “Relations between the two countries has been very good and close in the recent years, continuing in President Nicolás Maduro’s term of office.”

“In political and economic fields, we will continue the same path in relations between the two countries,” added Rouhani.

He also described the new ambassador a very active and effective figure in the Venezuelan government, saying that appointing him as the new Ambassador to Tehran indicated Caracas’ caring about relations between the two countries.

The new Ambassador of Venezuela to Tehran Cordones also presented his letter of credence to President Rouhani and said, “in this new conspiracy, we are facing global imperialism and the people of Venezuela will win this fight.”

“In our fight against imperialism and conspiracies, we are counting on our good friends, including Iran,” he continued.