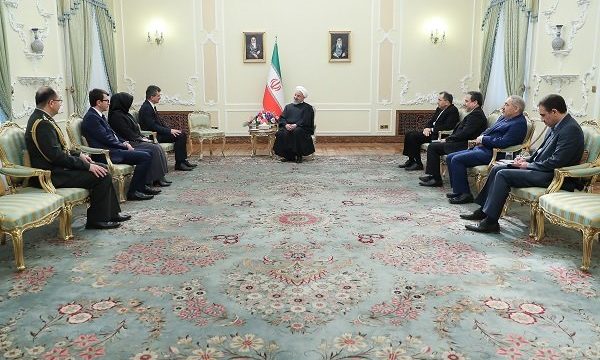 MNA – The Iranian President Hassan has highlighted the importance of Iran’s cooperation with Russia and Turkey in the Astana process on Syria settlement.

According to the official website of Iranian Presidency, President Hassan Rouhani made the remarks in a meeting with the new Ambassador of Turkey to Tehran Derya Ors on Saturday, while receiving her letter of credence.

Rouhani said “today, the political views of the two countries towards the region and the world are very close.”

“We are together in the great fight against terrorism and we share points of view on development of bilateral relations,” he continued.

Rouhani added “today, ties between Tehran and Ankara are closer, deeper and longer than 40 years ago, and without a doubt, these friendly ties are beneficial for the two countries and the region and we can bring about peace and stability for the region with each other’s help.”

He added “today, Iran, Russia and Turkey have political cooperation with each other in a very important regional issue, which is Syria.”

“In deepening economic cooperation, the public and private sectors of the two countries need to be closers to each other and cooperate in energy, transit and pots to serve the two countries’ interests,” added Rouhani.

He also underscored that the two countries have very close points of view in international and global issues, adding, “Iran and Turkey also have close views on the issues of the World of Islam, including Palestine, Yemen and Myanmar.”

The new Ambassador of Turkey to Tehran also presented his letter of credence to President Rouhani and offered congratulations on the 40th anniversary of the victory of the Islamic Revolution.

He said “I will do my best to develop economic, cultural and political relations between the two countries.”

“The Islamic Republic of Iran and Turkey are two powerful countries in the region and have major potentials for development of these relations,” he continued.