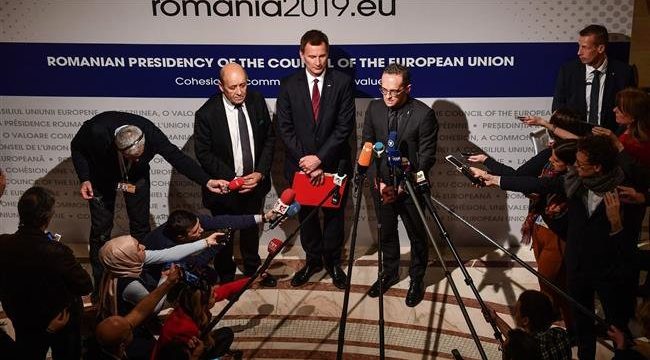 Press TV – The European signatories to the 2015 Iran deal formally announce the launch of a long-awaited direct payment mechanism meant to safeguard their trade ties with Tehran in the face of the “toughest ever” American sanctions.

“France, Germany and the United Kingdom, in accordance with their resolute commitment and continued efforts to preserve the Joint Comprehensive Plan of Action (JCPOA) endorsed by United Nations Security Council resolution 2231, announce the creation of INSTEX SAS (Instrument for Supporting Trade Exchanges), a Special Purpose Vehicle (SPV) aimed at facilitating legitimate trade between European economic operators and Iran,” the three foreign ministers said in a joint statement,” they said in a joint statement.

They also underlined their commitment “to pursue the further development of INSTEX with interested European countries to make this instrument in support of trade exchanges with Iran operational by following the steps set out above.”

Iran will also need “to create an effective and transparent corresponding entity that is required to be able to operationalise” the mechanism,” it added.

France, Germany and the UK are the initial shareholders of the INSTEX mechanism for trade with Iran, which has been registered in the French capital, Paris, with a capital of 3,000 euros, and will be governed by a German banking expert, according to AFP and German media.

INSTEX is designed to pave the way for European firms to do business with Iran while evading the strict sanctions the US re-imposed against Iran last year after leaving the 2015 multinational nuclear deal, formally called the Joint Comprehensive Plan of Action (JCPOA).

The mechanism will initially facilitate trade of humanitarian goods such as medicine, food and medical devices.

“It is a political act,” French Foreign Minister Jean-Yves Le Drian told reporters, adding, “It is a gesture to protect European companies.”

For his turn, Britain’s Foreign Secretary Jeremy Hunt said the three countries were working closely with Tehran to finalize arrangements.

“Registration is a big step, but there is still more work to be done,” Hunt said.

“We remain ready for constructive engagement with Europe on equal footing & with mutual respect,” the top Iranian diplomat tweeted.

Iran welcomes #INSTEX—a long overdue 1st step—in E3 implementation of May 2018 commitments to save JCPOA by ensuring dividends for Iranians after US’ illegal reimposition of sanctions. We remain ready for constructive engagement with Europe on equal footing & with mutual respect.

Earlier in the day, Iranian Deputy Foreign Minister Seyyed Abbas Araqchi described the launch as “the first of a set of commitments to Iran that the Europeans must fulfill,” expressing hope that mechanism will not be left incomplete.

The payment system, he said, could “fully meet our interests only when it is accessible to non-European firms and countries…so it could cover our entire international purchases,” adding that this feature “is apparently slated to be realized in the next phase.”

Details about how the mechanism functions will be put to talks in the future expert-level meetings between Iran and Europe, Araqchi added.

Shortly after the announcement, the EU’s foreign policy chief, Federica Mogherini, who has been leading the bloc’s efforts to keep the Iran deal alive, issued a statement in support of INSTEX, saying, “The instrument launched today will provide economic operators with the necessary framework to pursue legitimate trade with Iran.”

Statement by @FedericaMog on the creation of INSTEX (Instrument for Supporting Trade Exchanges): https://eeas.europa.eu/headquarters/headquarters-homepage/57475/statement-high-representativevice-president-federica-mogherini-creation-instex-instrument_en …

Statement by High Representative/Vice-President Federica Mogherini on the creation of INSTEX,…

31 people are talking about this

“We will continue to accompany the work of the Member States involved to make this vehicle operational as soon as possible in close coordination with the Iranian counterparts. We support their commitment to further develop INSTEX with interested European countries and open it, at a later stage, to economic operators from third countries,” the statement added.

Unhappy with efforts by allied EU countries to blunt the impact of American bans, Washington sought to play down the newly-launched mechanism.

Joseph Giordono-Scholz, the spokesman for the US embassy in Berlin, said Thursday that Washington was “closely following” the developments regarding the EU’s financial channel with Iran.

“As the President (Donald Trump) has made clear, entities that continue to engage in sanctionable activity involving Iran risk severe consequences that could include losing access to the US financial system and the ability to do business with the United States or US companies,” he said.

The diplomat further claimed, “We do not expect the SPV (special purpose vehicle) will in any way impact our maximum economic pressure campaign.”

Following its withdrawal from the Iran deal, Washington warned its European allies against any attempt to evade its anti-Iran sanctions, threatening those refusing to abide by the bans with “terrible consequences.”

The Europeans, however, said they were intent on trying to salvage the deal and find ways to compensate for Washington’s absence in an effort to keep Tehran in the deal.

Iran has said the JCPOA without the US should meet its economic interests or it will leave the nuclear deal.