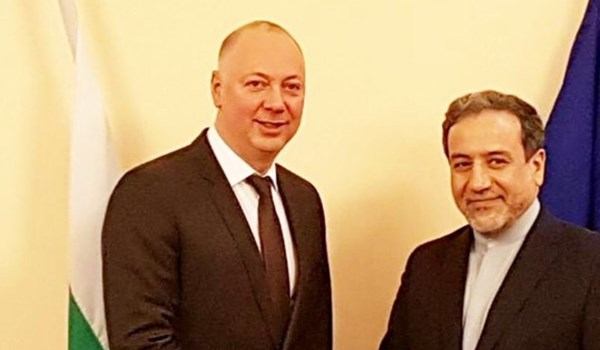 FNA – Bulgarian Transport Minister Rosen Zhelyazkov underlined his country’s firm decision to continue cooperation with Iran despite the US pressures and sanctions.

Zhelyazkov made the remarks in a meeting with Iranian Deputy Foreign Minister for Political Affairs Seyed Abbas Araqchi who is currently visiting the country on the third leg of his official visit to Europe.

He hailed historical and traditional relations between the two countries and the 120th anniversary of the establishment of the two countries’ political ties, saying close cooperation with the Islamic Republic of Iran is one of his country’s priorities.

To revive the past economic relations and achieve the desired level of relations require taking advantage of transportation and agricultural capacities of the two countries, Zhelyazkov said.

He also voiced his country’s readiness for holding the 19th joint commission of the two countries in near future.

During his separate meetings with Slovakian officials, Araqchi held talks on developing bilateral relations specially in economic and political fields as well as important regional and international developments.

They also extended support for developing mutual cooperation and continuation of consultations.