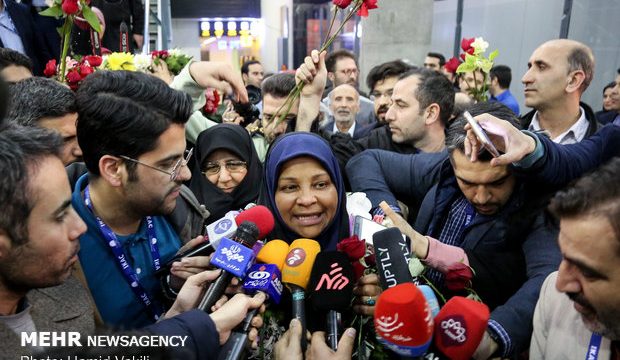 Press TV – Press TV anchor Marzieh Hashemi, who was jailed in the US without charge for 10 days and later freed amid public outcry, has arrived in the Iranian capital Tehran.

The journalist, a 59-year-old American-born Muslim convert who has lived in Iran for years, was detained by the Federal Bureau of Investigation (FBI) at St. Louis Lambert International Airport in Missouri on January 13 while in the US to visit her ill brother and other family members.

She was released after 10 days of detention at a Washington, D.C facility.

A US federal court failed to indict the journalist, who was arrested as a material witness and in an unspecified criminal proceeding, of any crime.

People wait for #MarziehHashemi‘s arrival at Tehran Imam Khomeini International Airport after she was released from US detention without any charge pic.twitter.com/zhu71FB9nJ

Hashemi’s detention prompted condemnation in the US and abroad, sparking rallies in several countries, including the United States.

In an address during demonstrations in Washington, D.C, Hashemi recounted her ordeal during her time in jail and mistreatment by the American justice system.

While in detention, she was forced to remove her hijab and was only offered non-halal food.

Following her release, her family issued a statement, reiterating the need for justice in similar cases.

“Marzieh and her family will not allow this to be swept under the carpet,” the woman’s family said in the statement. They “still have serious grievances [and] they want assurances that this won’t happen to any Muslim – or any other person – ever again.”