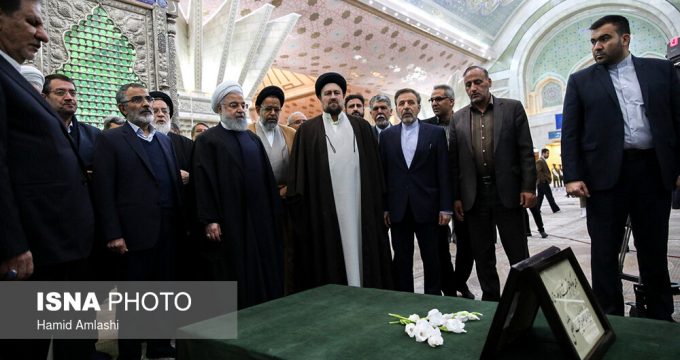 Nobody can harm us as long as we follow Supreme Leader

President.ir – President congratulated the 40th anniversary of the victory of the Islamic Revolution and said, “Trusting people was the Late Imam Khomeini’s highest skill”.

Speaking at the ceremony of renewing allegiance to Imam Khomeini and martyrs’ ideals on Wednesday, President Hassan Rouhani said, “Imam Khomeini is the greatest reviver of religion in our times and the architect of a revolution that achieved victory by relying merely on people”.

Stating that, “People believed in Imam Khomeini’s honesty,” the President continued, “One of Imam Khomeini’s skills was that he proved that building a correct, fair system had a great value”.

“Imam Khomeini believed that tyranny was the biggest wrong to be forbidden,” continued President of the Islamic Republic of Iran.

He also went on to say, “Imam Khomeini interpreted the aspects of the religion that were less known to people”.

The President continued, “He aroused hope of a better future, an independent country and the ruling of people and Islamic rules”.

“The hope Imam Khomeini brought to people mobilised the Iranian society, something that is unprecedented in the history,” said Rouhani.

He added, “He proved that ‘enjoining the good and forbidding the bad’ could also include domestic tyranny and foreign colonialism”.

Dr Rouhani continued, “Imam Khomeini was not afraid of foreign powers, but concerned about domestic division”.

Stressing that it was Imam Khomeini who introduced the Islamic Republic system, he said, “Our system will be in danger if people have doubts about the two principles of Islam and Republic”.

The President also said, “Nobody can harm us as long as we follow the Supreme Leader”.

The President continued, “The US Administration will definitely fail in its latest move against the Iranian nation”.

“Today, the entire world is condemning the US conspiracies against the Iranian nation and support Iran in this regard,” he continued.

He also went on to state that the United States did not just break its promise to Iran, adding, “The US has showed the same lack of commitment to Europe, China and international treaties and regulations”.

“Most of our problems are because of the pressure from the side of the United States and its followers,” he said, adding that it is not right for some people to blame their system and government for this.

He continued, “The highest honour for us in the recent years is our negotiations with the world powers and clinching moral, legal and political victory over them”.

“The biggest economic pressure in the past 40 years on the Iranian nation has been plotted,” he said, adding that, “If we all stand together, we will be victorious in this stage as well”.

At the end of his speech, Dr Rouhani also went on to congratulate the 40th anniversary of the victory of the Islamic Revolution to the people, authorities and Imam Khomeini’s family and grandson.