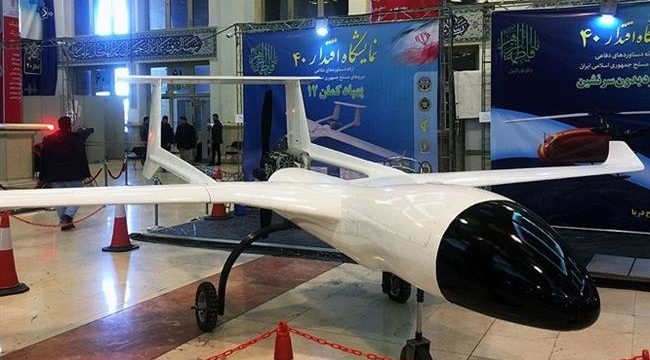 Press TV – Iran’s Armed Forces have unveiled new military hardware, including drones and missiles, during an exhibition ahead of the 40th anniversary of the 1979 Islamic Revolution.

The drones unveiled included the country’s newest one, Kaman-12. The aircraft can fly at 200 kilometers per hour for 10 straight hours.

It can use an airstrip as short as 400 meters and covers a 1,000-kilometer combat radius.

The UAV weighs 450 kilograms and can carry a payload as heavy as 100 kilograms.

Among the other drones were a renovated Shahed-129, which is capable of carrying out surveillance, reconnaissance, and combat operations using bombs and missiles.

It can carry four Sadid smart bombs and can be guided using optical, laser, or infrared equipment.

The UAV can fly as far as 2,000 kilometers for 24 hours, refueling only once.

The Sa’eqeh-2 drone, which was also put on display, can carry four guided bombs.

Last October, Iran fired missiles at terrorist targets in retaliation for an attack against a military parade in southern Iran that had claimed 25 people. The retaliatory missile raids were followed by drone strikes, during which seven Saeqeh aircraft were used.

The Wednesday event also featured Iranian RQ-170 and Mohajer-6 drones. The latter can be fitted with Qa’em missiles.

A picture dated January 30, 2019 shows an Iranian RQ-170 drone put on display during the exhibition. (By Fars news agency)

The Akhgar missile, which was featured at the expo, is the latest projectile manufactured for deployment on Iranian drones.

The 1.7-meter-long, television-guided missile has a range of 30 kilometers and can fly at a speed of 600 kilometers per hour.

Qassed-3, which had so far only been showcased during military parades, was put on display at the event.

It can be deployed on fighter jets. It is 5.15 meters in length, can carry a 453-kilogram warhead, and has a range of 100 kilometers.

It has a microjet engine, which enables it to be fired at a speed of 600 kilometers per hour toward targets, and is guided using a seeker head.

Shahin is an anti-missile projectile, which can be fitted onto Air Force fighter planes. It was showcased at the exhibition for the first time.

The missile can be used to jam radars and enemy’s electronic equipment.