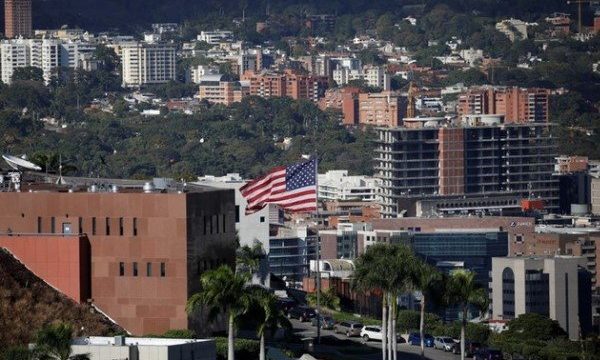 Sputnik – The United States announced Monday that it was imposing sanctions on Venezuela’s state-owned oil company PDVSA as part of an effort to transfer power away from President Nicolas Maduro to country’s opposition leader Juan Guaido.

The move comes a week after the head of the opposition-controlled National Assembly, Juan Guaido, proclaimed himself Venezuela’s interim president. The Trump administration swiftly recognized Guaido while calling on Maduro to step down.

The US government appeared to confirm all of Maduro’s suspicions in one fell swoop during a star-studded joint press briefing at the White House featuring three members of US President Donald Trump’s cabinet: US National Security Adviser John Bolton, Treasury Secretary Steven Mnuchin, and Chief Economic Policy Adviser Larry Kudlow.

In particular, the United States has imposed sanctions against Venezuela’s state-owned oil company, PDVSA, US National Security Adviser John Bolton said Monday during a press briefing at the White House.

“We have continued to expose the corruption of Maduro and his cronies, and today’s action ensures they can no longer loot the assets of the Venezuelan people,” Bolton said Monday.

The Trump administration also said Monday it would freeze $7 billion worth of PDVSA’s assets in US jurisdictions.

Moreover, according to US Treasury Secretary Steven Mnuchin, any purchases of Venezuelan oil by US companies will be transferred into the blocked accounts.

“I expect very modest impacts on the US refineries. We’ve been working with them closely on these issues”, Mnuchin told reporters at the White House on Monday.

“We have also issued general licenses to ensure that certain European and Caribbean countries can make an orderly transition”, Mnuchin said. “We continue to call on all of our allies and partners to join the United States in recognizing interim President Guiado and blocking Maduro from being able to access PDVSA funds.”

“We will use all diplomatic and economic tools to support Guaido”, Mnuchin stressed at a White House press briefing.

However, Steven Mnuchin also said during a press briefing that Washington could consider sanctions relief for PDVSA if the country’s President Nickolas Maduro agrees to transfer power to the opposition leader Juan Guaido.