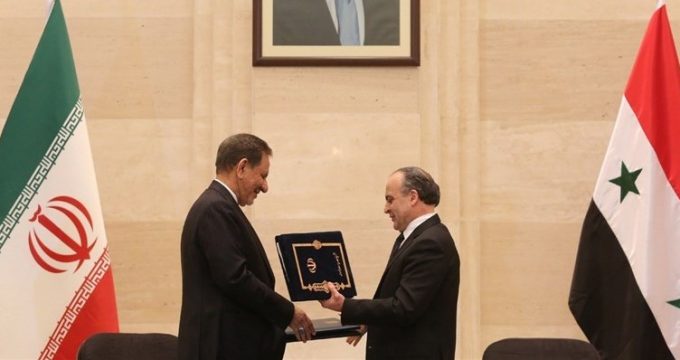 High-ranking officials from Iran and Syria inked 11 agreements, including memorandums of understanding (MoUs), in a bid to boost cooperation between the two countries in diverse areas.

Secretary of the Supreme National Security Council Rear Admiral Ali Shamkhani said Iran has no intention to increase the range of its missiles according to its defense doctrine.

President Bashar al-Assad received on Tuesday Iran’s first vice president Eshaq Jahangiri and the accompanying delegation in the presence of the Prime Minister and a number of ministers.

Iranian Deputy Foreign Minister referred to the recent developments in the Middles East saying the destructive policies taken by the Israeli regime is the main cause of instability in the region.

Iranians condemn US plots in Venezuela

A host of people of Tehran gathered in front of the Venezuelan embassy in the Iranian capital city on Tuesday to voice their support for the legal government in Caracas, and condemn the US-backed failed coup in the Latin American country.

Iranian Defense Minister Brigadier General Amir Hatami reiterated that holding negotiations on the country’s missile and defense power is out of the question.

German Foreign Minister Heiko Maas said Mon. that consultations between Germany, France, the UK and the European Union have led to agreement on setting up the Special-Purpose Vehicle (SPV) with Iran soon.

The Iranian Deputy Foreign Minister Seyed Abbas Araghchi said Monday that 8 months is too long for establishing the Special-Purpose Vehicle (SPV) by the European countries.

Iran’s best achievements made in defense sector despite sanctions: IRGC

The spokesman for the Islamic Revolution Guards Corps (IRGC) highlighted Iran’s self-sufficiency in the military sphere and said the “most outstanding achievements” of the country have been made in the defense sector that has been the target of the most severe sanctions.

Vice President Es’haq Jahangiri said that Iran takes pride that it has been forerunner of fighting terrorism, adding that if it were not for the Syrian government and people and well as its allies’ sacrifices, today Daesh had succeeded in region.