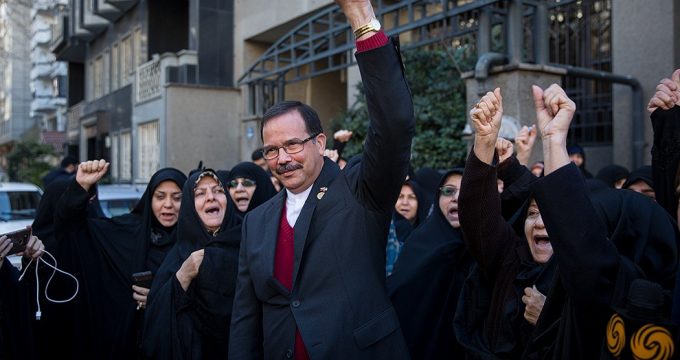 Iranians condemn US plots in Venezuela

FNA – A host of people of Tehran gathered in front of the Venezuelan embassy in the Iranian capital city on Tuesday to voice their support for the legal government in Caracas, and condemn the US-backed failed coup in the Latin American country.

A number of people in the Iranian capital city of Tehran congregated in front of the Venezuelan embassy building today, chanting slogans in support of the democratically elected president and administration of the Latin American country.

The participants also called for unity between the people of Venezuela, urging Venezuelans to avoid further insecurity and chaos, and mark their disapproval of coup attempt.

The crowd also condemned the US and Europeans’ support for coup in Venezuela, and called upon the people of Venezuela to be vigilant and not fall into the trap of the coup.

The Venezuelan ambassador went among the participants, and voiced gratitude for the support of Iran and many other countries of the world for his country.

He also condemned US meddlesome policies in Venezuela.

At the end of the event, participants read out a statement to underline their support for the democratically picked president and government of Venezuela.

Iranian Judiciary Chief Ayatollah Sadeq Amoli Larijani on Monday said that the failed coup in Venezuela was a fiasco for Westerners supporting instability in Caracas, adding that the event exposed the real face of the US and its allies.

Ayatollah Amoli Larijani condemned the US administration failed coup attempt in Venezuela, saying that the attempt showed the true face of the US and Western governments’ calls for democracy and human rights.

“What happened in the form of an American coup in Venezuela was not a new incident,” the senior Iranian official said in a meeting with judicial officials.

“Although the coup failed, it was a warning to other nations to be more vigilant against the true nature of America and Europe,” Amoli Larijani added.

The Judiciary chief added while the coup was not successful, the US administration recognized the coup plotters and sent millions of dollars there to push the country towards chaos and destroy its human and natural resources.

“In Yemen, they put millions of people under siege and thousands of people are now facing severe hunger, but they (the western countries) do not care at all. For them, human rights only belong to the US and European people,” he went on to note.

The western powers have staged various brutal coups in Latino America, Amoli Larijani said, adding that the time is over for bringing people to the streets through money and stage coups.

In a related front, earlier on Monday, Venezuelan Ambassador to Tehran Carlos Antonio Alcalá Cordones condemned the US role in fanning insecurity and driving wedge in his country, and added that Washington is imposing its imperialistic policies on Caracas.

Alcalá Cordones made the remarks at a meeting with university students at Venezuela’s embassy in Tehran, where Iranian academicians and college-goers voiced their support for the people of Venezuela.

He said the US is to impose its imperialistic policies in Venezuela, reminding that Washington hit the wall of unity, determination and peace for Venezuelan nation.

“Venezuela is determined to continue its struggle against imperialism, thanks to the country’s geopolitical status,” the diplomat asserted.

Venezuela is not alone in its struggle and now has won support of its friendly countries, the Venezuelan ambassador said.

Venezuela is on its right path, and this has been confirmed by the UN and is to continue the path, he underlined.

Following the meeting with students and academicians, Alcalá Cordones said in an exclusive interview with Fars News Agency that Maduro’s administration has undertaken several measures and is planning to implement new plans to counter US’ meddlesome policies in the Latin American country.

“Some early measures and solutions have been undertaken and devised under the guidance of President Nicolás Maduro,” the diplomat said, adding, “In addition to the national army of Venezuela, an army is being formed by common people volunteers to counter any probable move of the US” against the oil-rich country.

The envoy also added that there are some measures being put into practice in areas of economy, specially in empowering sectors of agriculture and animal husbandry.

Alcalá Cordones added that some move are being carried out to support the masses of people socially.

“Our late commander, Hugo Chávez made great efforts and restored the historical bonds of our people,” he said, when asked what measures were put into practice in terms of increasing cultural awareness for fighting colonization and preventing the deception caused by US propaganda.

“The people of Venezuela are very wise and vigilant and the Constitution has encompassed in all its letters the rights of people. So the decisions of the Venezuelan people are based on their high level of understanding and wisdom,” he highlighted.

He underlined that the number of people fallen into US propaganda is small, adding, “Even the small number of opposition groups and protestors have enjoyed the benefits of the cause of President Chávez.”

“The two sides stressed their mutual readiness to promote mutual understanding between the responsible political forces of Venezuela in the interests of ensuring internal peace and resolving urgent social and economic problems as soon as possible,” the Russian Foreign Ministry said of the talks between Lavrov and Zarif.

In a related front, earlier on Friday, Zarif, in a phone conversation with his Venezuelan counterpart Jorge Arreaza, voiced Tehran’s strong support for the legal government in Caracas, and condemned the US’ interfering role in the Latin American country.

Zarif said that Iran supports the legal government in Venezuela and the country’s people in the face of all plots, particularly those hatched by Washington.

The top Iranian diplomat made the remarks in a phone conversation with Venezuelan Foreign Minister Jorge Arreaza on Friday amid massive protests organized by the US in the Latin American country.

The Iranian and Venezuelan foreign ministers discussed possible avenues for countering the US plots against independent countries, particularly Venezuela, through international channels.

Zarif and Arreaza also exchanged views about ways to strengthen negotiations between the Venezuelan government and the opposition groups and find a political solution to the ongoing conflict between the two sides.

At least 10 countries, including Russia, Turkey and Iran, have expressed their support for Venezuelan President Nicolas Maduro and condemned outside interference in Caracas.

China, which has backed Venezuela’s sovereignty, said it opposed any outside interference. Bolivia, Mexico and Cuba all supported the Venezuelan president.

Maduro on Friday ordered the closure of Venezuela’s embassy and consulates in the US after Washington threw its weight behind opposition leader Juan Guaido, who declared himself interim president earlier this week.

Earlier on Friday, Advisor to the Iranian Parliament Speaker Hossein Amir Abdollahian said that the US’ role in instigating riot and chaos in Venezuela epitomizes Washington’s double standard approach to international relations.

“Trump continues his intervention and the blatant abuse of Venezuela’s internal conditions and insists on instigating riots and civil war in the country, instead of respecting democracy and pushing the opposition towards a national dialogue,” Amir Abdollahian wrote on his Twitter page.

“This is another example of the United States and its allies’ double standards,” he added.

In a related front, Iranian foreign ministry called for the peaceful settlement of the crisis in Venezuela, stressing support for the country’s government and nation against foreign intervention.

Iranian Foreign Ministry Spokesman Bahram Qassemi reacted to the recent political developments in Venezuela and the US overt and unlawful interventions in the country’s domestic affairs on Thursday.

“The Islamic Republic of Iran supports the government and the nation of Venezuela in the face of any foreign intervention in the country’s internal affairs or any illegal or anti-popular actions, such as attempts to stage coups,” he said.

Qassemi expressed the hope that any political disagreements in Venezuela would be resolved as soon as possible by the people and government of the country through adoption of legal and peaceful solutions.

Following the US’ recognition of Venezuelan opposition leader Juan Guaido as the interim president of the country, Venezuela’s President Nicolas Maduro said Wednesday that Caracas was breaking diplomatic relations with the US, giving American diplomatic personnel 72 hours to leave the country.

Maduro stressed that the US had attempted to stage a coup in Venezuela, and vowed to fight for the Venezuelan people’s right to peace and a sovereign government of their choosing.

“We’ve had enough interventionism, here we have dignity, damn it!” he said in a televised address from the presidential palace.