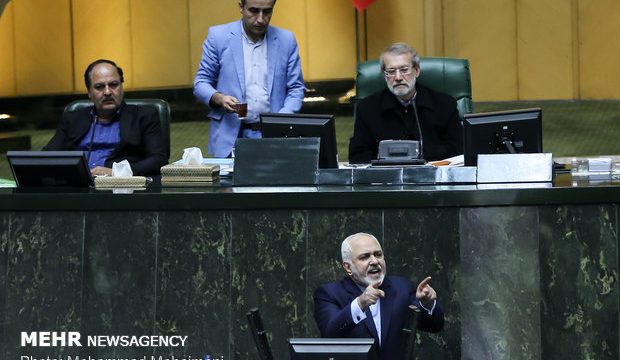 IRNA – Iran has managed to offset all the enormous efforts by the US and the Zionist regime who employed all their means to pressure the country, Iran’s Foreign Minister Mohammad Javad Zarif said on Monday.

Commenting on the achievement of the Joint Comprehensive Plan of Action (JCPOA) which Iran signed with six world powers on Tehran nuclear program, he told the Iranian Parliament on Mounday that ‘Iran has succeeded in exiting Chapter VII of the UN Charter which was a great defeat to the US and the Zionist regime.’

He went on to stress that enemies ‘tried for 30 years to push Iran into that particular situation but Iran managed to overcome it.’

Zarif said this achievement was one of the most remarkable gains of the nuclear deal Iran signed in 2015.

He said this was the only time a country managed to do this without suffering a significant loss.

The Chapter VII of the UN Charter says, “The Security Council shall determine the existence of any threat to the peace, breach of the peace, or act of aggression and shall make recommendations, or decide what measures shall be taken in accordance with Articles 41 and 42, to maintain or restore international peace and security.”

Noting that the US President Donald Trump has done his best to inflict blows to Iran in the past two years, he said ‘Iran is not relying on Europe but rather is working to isolate the US , while Europe and Russia are main parties in this endeavor.’

Iran foreign minister added that Iran defeated the US in the UNSC four times; they will hopefully fail in Warsaw conference as they did in Riyadh meeting.

The US Secretary of State Mike Pompeo announced in a recent visit to the region that he is going to co-host an anti-Iran meeting in Warsaw, Poland, in mid February. He said some of the Persian Gulf Littoral states that hold anti-Iran positions as well as Israel are to attend the meeting.

Zarif said ‘There is no denying the fact that we have had shortcomings in the past forty years, but the point is that we have maintained independence and created a situation where no one can decide for us, a truth which is very inspiring.’

‘This independence had its own costs and there was a lot of pressure on us because of it,’ he said.

He further referred to Iran as an ‘influential’ country which was the ‘harbinger of peace’ in a region which really needs it.