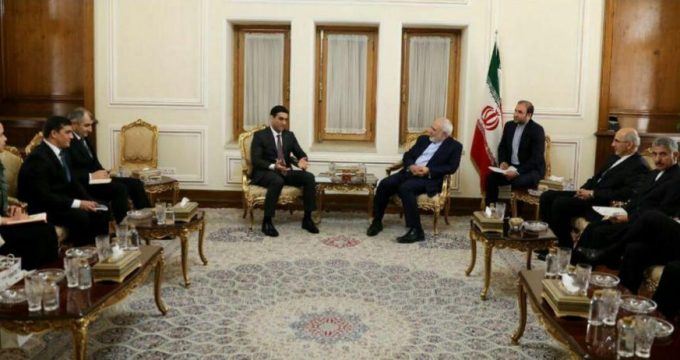 IRNA – Iranian Foreign Minister Mohammad Javad Zarif said on Sunday that no issue should leave impact on friendly ties between Tehran and Ashgabat, and expressed the hope that the two sides’ joint economic commission meeting would be held in the near future.

Zarif made the remarks in a meeting with Turkmen Deputy Foreign Minister Wafa Hajjive in Tehran on Sunday.

The Islamic Republic of Iran attaches importance to the expansion of relations with Turkmenistan and believes relations between the two sides is very close, he said.

Iran always calls for expansion of relations and cooperation with Turkmenistan in various fields, and hopes to take advantage of all our capabilities in broadening such cooperation and friendship relations, Zarif added.

Referring to an agreement signed between the two sides on Caspian Sea legal regime, he said Iran is ready to implement jointly-run projects in the Caspian Sea.

No problem should leave impact on amicable ties between the two countries, he said, expressing the hope to witness formation of Iran-Turkmenistan joint economic commission in the near future.

Turkmen deputy foreign minister, for his part, underlined the importance of relations between the two countries.

Turkmenistan will do its utmost to remove the existing hurdles to help broaden and deepen relations and cooperation between the two countries, he said.