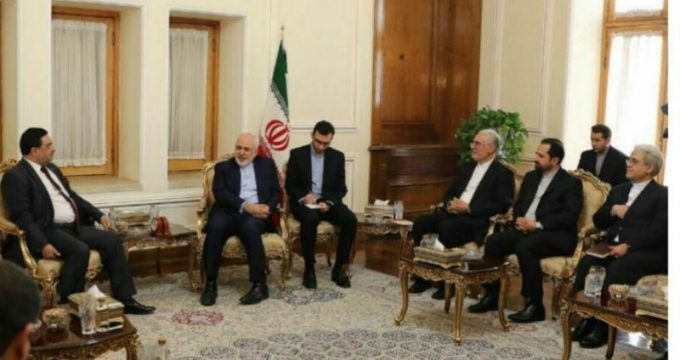 Zarif made the remarks in a meeting with Chairman of the Committee on Foreign Affairs, Cooperation and Emigration of the National Popular Assembly (the lower Chamber of the Algerian Parliament) Abdelhamid Si Afif in Tehran on Sunday.

Recalling the friendly and fraternal relations between Iran and Algeria, the Foreign Minister said, ‘The relationship is based on long-term friendships and heartfelt cooperation between the two countries, and the Iranian government and the people of Iran have great respect for the revolution, the people and the people of Algeria and their success.’

Pointing out that the two countries have good political relations and cooperation, the Iranian foreign minister expressed the hope that bilateral economic relations would be expanded in the light of the efforts of both sides.

The high-ranking diplomat said that Algeria has good position on various issues, including Iran’s nuclear program, in the fight against extremism and so on by choosing logical and principled policies.

The Algerian official, for his part, stated that friendly and fraternal relations with Iran are of great importance to Algeria, while welcoming Zarif’s statements, announced his country’s readiness for extensive cooperation with the Islamic Republic of Iran.

Expressing that Algeria has an independent policy, Si Afif added that his country, while avoiding interference in the internal affairs of other countries, is not affected by the promotion of third-party communications in the field of relations with Iran, and tends to extend these relations to a wider range of fields.