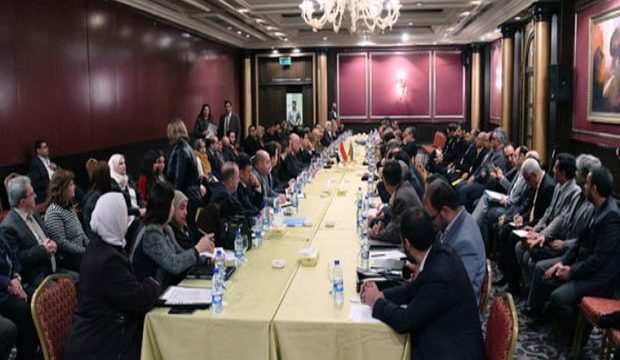 Iran’s Deputy Minister of Roads and Urban Development Amir Amini said that holding meetings is an evidence of Iran’s and Syria’s strong will to cooperate and deepen the various aspects of strategic relations.

He hoped to reach achievements and agreements that serve the interests of both Syrian and Iranian people.

Amini said that the countries that imposed the war on Syria for seven years now realized the strength of Syrian people and began to work to restore their economic relations with Syria, whose economy has started to rise.

He emphasized Iran’s readiness to contribute to the reconstruction process in Syria.

Assistant of the Head of the Planning and International Cooperation Authority, Thoraya Idlbi, said that Syria looks forward to strong economic relations with Iran to positively reflect on the two friendly nations and keep pace with the distinguished political ones.

She pointed out that cooperation between the two sides has yielded the signature of the joint economic cooperation agreement in 2015 and contracts in the fields of agriculture, oil and telecommunications, as well as Iran’s first and second credit lines.

Idlbi made it clear that the long-term strategic economic cooperation agreement and its supplements was reached at the end of last year during meetings held in the Iranian capital.

The preparatory technical meetings aim to prepare a memorandum of understanding for the Joint High Committee and a number of documents that serve the interests of the two countries through projects and agreements in various sectors.

The agenda of the committee’s three-day meetings includes technical discussions followed by meetings of ministerial committee chaired by Minister of Economy and Foreign Trade Mohammad Samer Al-Khalil and Iranian Minister of Roads and Urban Development Mohammad Islami. Later, activities of the Joint High Committee will be launched and documents to be inked.