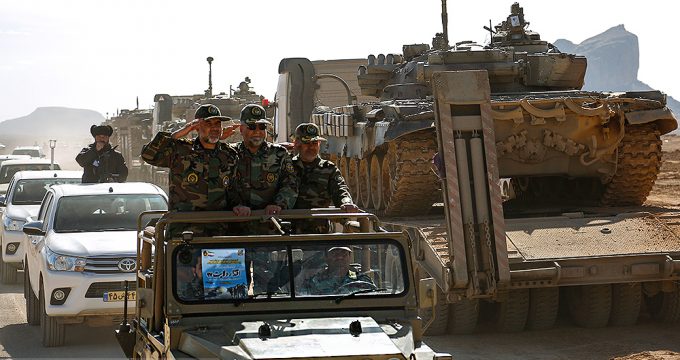 Demonstrating quick mobilization of forces as well as providing airborne support to helicopters throughout the maneuver were among the major goals of the drill.

According to General Heidary, in this drill, two important developments showcased: a special-forces rapid deployment battalion and a highly mobile offensive armored battalion.

On the first day of the drill, the Mohajer drones, manufactured by Self-sufficiency Jihad Organization of the Army Ground Forces, along with RF-4 fighters carried out reconnaissance missions over Nasrabad district.

The army transport Chinook 214 helicopters along with combating choppers were also deployed in the area and carried out heliborne, reconnaissance and combating missions. The combating choppers detected and destroyed the enemy’s elements, equipment, and fortifications.

During Saturday’s operations, the Ground Force’s fixed and mobile artillery units practiced hitting the enemy’s positions with smart and precise shells with a range of 10 to 30 kilometers.

The mechanized infantry and armored units also launched an assault on the hypothetical enemy’s positions.

The Ground Force Airborne Unit’s combat helicopters also flew over the operation zone to cover the armored units on the ground and opened heavy fire on hostile targets.

During the last day,  the Iranian Army Ground Force practiced a tactic to prevent the enemy from closing in on the battlefield by creating a long row of blasts using remote-controlled land bombs.

Speaking at a televised program on Saturday night, Brigadier General Kiomars Heidari outlined the achievements of a large-scale military exercise that his forces held in the central province of Isfahan and said the Army has made structural changes to its combat strategies, noting that a focus on offensive approach has been put on the agenda of the Iranian Armed Forces.

The general said the Army Ground Force does not rely on “asymmetric warfare” as a strategy anymore, adding that the military forces have gained such a high level of deterrent power that they have abandoned the asymmetric warfare strategy and focused on effective offensive tactics instead.

In recent years, Iran has made major breakthroughs in the defense sector and attained self-sufficiency in producing important military equipment and hardware.