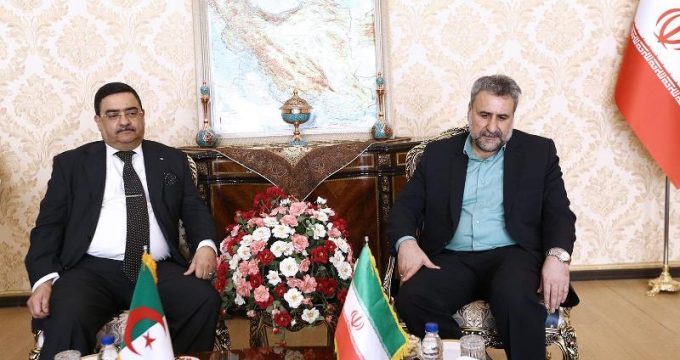 IRNA – A senior Algerian lawmaker said that his country is willing to expand trade and economic ties with Iran.

‘Algeria is looking forward to expand economic cooperation with the Islamic Republic and it’s also looking to cooperate in other fields in which both sides are highly capable,’ said Abdelhamid Si Afif, Chairman of the Committee on Foreign Affairs, Cooperation and Emigration of the National Popular Assembly (the lower Chamber of the Algerian Parliament) on Saturday.

The official highlighted ‘strong and friendly parliamentary relations’ between the North African country and Iran. ‘Algeria has hosted various delegations from Iran and many high-level talks have been held between the two countries,’ said Si Afif during a meeting with his Iranian parliamentary counterpart, Heshmatollah Falahat-Pisheh in Tehran.

The Iranian lawmaker praised ‘good and friendly bilateral relations’ between Iran and Algeria.

Falahat-Pisheh also expressed hope ‘some problems in the way of implementing previously-reached agreements, including in banking and trade sectors’ would be resolved.

Chairman of the Iranian parliamentary Commission on National Security and Foreign Policy said Iran’s peaceful nuclear energy programme and enhancing its defense capabilities by using its own knowledge has turned into a ‘challenge’ for the US, Israel and their regional supporters.