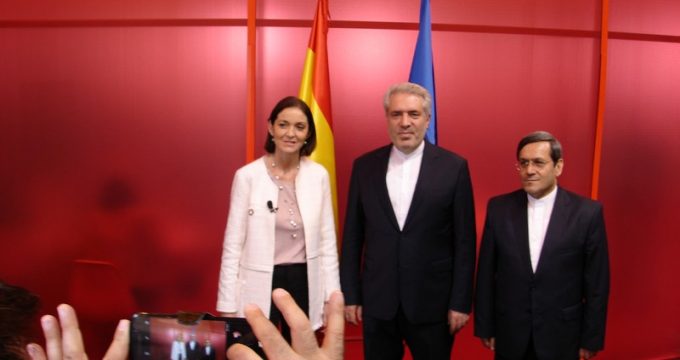 January 25, The Iran Project – Iranian exhibitors take part in the 39th International Tourism Fair of Spain known as “Fitur 2019” which held in the Spanish capital of Madrid during 23-27 January, introducing Iran tourist attractions.

Iran is among the top exhibitors and displays 31 operator tours together with parts of the country’s potential, facilities and tourist as well as arts attractions.

The Fitur exhibition is one of the world’s major and important tourism exhibitions and it brings together 10,485 participants from 165 countries.

The CHTO head told his host that “six million tourists visited Iran in the first nine months of the current Iranian calendar year of 1397 (started on March 21, 2018), while adding, “Iran is among top 10 countries worldwide in terms of tourist attraction and over recent years, expansion of tourism has been the priority of Iranian government.”

On the first day of the exhibition,  Spain’s King Felipe VI accompanied by his queen visited Iran’s pavilion.

Durin inspecting Iran’s pavilion, Spain’s king held short talks with the CHTO head and expressed satisfaction over his visit, he also highlighted historical and cultural affinities between the two countries and also voiced his love for Iran’s live music displayed during his stay at the pavilion.

The Iranian official welcomed the visit of Spain’s king and briefed him on Iran’s tourists’ attractions and present a carpet tableau bearing an image of the king and queen as a gift to him.

Speaking on the sidelines of the International Tourism Trade Fair or Fitur 2019, Director General of the Public Diplomacy Department at Iranian Foreign Ministry Ali Pakdaman said the Exhibition of “Iran, the Cradle of Civilization” will be held in Spain, it slated for March 14 to September 1, will showcase 196 highly valuable ancient and historical artifacts, including 20 pieces of gold, an inscription depicting Darius I era soldiers and two statues.

Pakdaman said the exhibition will review Iran’s history from the presence of the first human being in Iran about 300,000 ago up to its welcoming Islam in the 7th century BC.