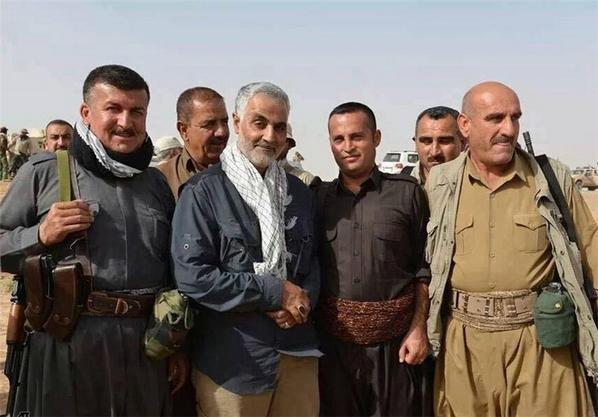 The Washington-based magazine recently published its 10th annual special edition of Global Thinkers with 10 categories of 10 people each.

It placed General Soleimani on top of the list of the most influential people in the defense and security sector, followed by German Defense Minister Ursula von der Leyen.

They are the thinkers and doers of the last 12 months, shaping our world—for better or for worse—as we know it. Read our full #FPGlobalThinkers list here: https://t.co/STXoTcy92S pic.twitter.com/tE4LIb9g4Y
— Foreign Policy (@ForeignPolicy) January 22, 2019

A short write-up on the senior Iranian commander described him as the “public face of Iran’s response to US President Donald Trump’s threats.”

General Soleimani made headlines last July, when he delivered a blistering response to an all-caps tweet addressed to President Hassan Rouhani, in which Trump had issued a military threat against the Islamic Republic.

The US president had threatened Iran with actions “the likes of which few throughout history have ever suffered before.”

In a fiery speech, the senior general responded, “Trump! You must not threaten our nation and must not insult our president… You must know what you are talking about; ask your predecessors and take advantage of their experiences,” General Soleimani emphasized.

“We are near you, where you can’t even imagine…Come; we are ready. We are the man of this arena. You know that this war would mean annihilation of all your means. You may begin the war, but it is us who will end it,” he added.

Trump threatened Iran again in a tweet in November inspired by popular American drama series “Game of Thrones.” It featured a picture of himself with the caption “sanctions are coming november 5.”

General Soleimani fired back at Trump by posting an Instagram photo with the caption, “I will stand against you.”

The IRGC commander is widely seen as a strategist in the counter-terrorism operations against Takfiri terrorists in Syria and Iraq.

The powerful general leads Iranian military advisers backing the national armies of Syria and Iraq in their fight against terrorism.

General Soleimani was present on the ground to supervise the decisive stages of Iran-backed operations against Daesh, which lost in late 2017 all the territories it had seized in Iraq and Syria.

He had been photographed on anti-terrorism battlefields from Iraq’s Mosul to Syria’s Aleppo.

The general took personal command of the battle against Takfiri militants in the Syrian city of Bukamal, located in Dayr al-Zawr Province, in November 2017.

In Iraq, at the height of Daesh’s terror camp in neighboring Iraq, he assisted the Baghdad government in commanding the operation to retake the strategic oil-rich city of Tikrit from Daesh in 2015.

He declared the end of Daesh’s territorial rule in a letter addressed to Leader of the Islamic Revolution Ayatollah Seyyed Ali Khamenei in November 2017.

In January 2015, the head of Iraq’s Badr Organization credited Tehran and Soleimani with saving the Baghdad government when Daesh first unleashed its campaign of terror in the neighboring country a year earlier.

“If it were not for the cooperation of the Islamic republic of Iran and General Soleimani, we would not today have a government headed by Haider al-Abadi in Baghdad,” Hadi al-Ameri said.

Several reports have also emerged over the past few years of assassination plots against Soleimani by the US, Israel and Saudi Arabia – which are believed to be among the major supporters of the Takfiri terrorists wreaking havoc on the Middle East.

In November 2018 , The New York Times reported that Saudi Major General Ahmed al-Assiri took part in a meeting in Riyadh in 2017 that involved plans to assassinate the kingdom’s “determined enemy.”